A gritty Sania Mirza saved four match points in a heart-stopping women's singles final before settling for a silver medal as she lost the action-packed match 3-6, 6-2, 6-7 (3) to top seed Anastasia Rodionova in the tennis event of the Commonwealth Games in New Delhi on Saturday.

Rodionova thus became the first player to win a gold medal in the debut year of the sport at the Games.

The 137th ranked Sania almost pulled it off but couldn't go the distance when she double faulted in the decisive tie-break.

She made a spirited comeback after surrendering the opening set, drawing level and then stretched the match to a decisive third set, where she saved three match points in the 12th game to force a tie-breaker. 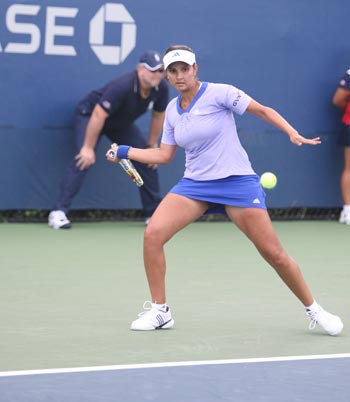 The second-seeded Indian served poorly almost all through but hit two of her four aces in that 12th game to keep her chances alive in the contest.

Down 1-3 in the tie-break with a mini break of serve, and then at 3-6 with three match points to save, this time Sania could not catch up as she double faulted for one last time to hand the gold medal to World number 62 Rodionova,.

Sania had broken Rodionova in the first game of the third set to go up 2-0 but could not build on the mini lead and allowed Rodionova to comeback by dropping her serve three times.

"I think what's important was that I gave my best but I felt a bit short. It is an honour to play for my country," Sania said.

"I have been trying really hard but now I feel am a real Australian after winning the Commonwealth Games gold medal," said Rodionova, the Russian who recently became an Australian citizen.

At the start, Sania struggled with her serve as double faults plagued her game right through the first set.

Rodionova was equally erratic as she hardly had control over her shots.

After trading breaks in the first five games, the Australian finally held one to go ahead 4-2.

Two more double faults combined with a forehand error by Sania put Rodionova within a game from taking the first set.

The top seed though dropped her serve when she fired a backhand into the net but sealed the first set with a backhand winner in the next game.

The sixth game was the only one which was not broken in the entire opening set that lasted 29 minutes.

The second set though unfolded differently as Sania saved two breakpoints -- second and fourth games -- and also broke her opponent in the third game to take a 3-1 lead.

Sania's fierce forehand fetched her points at crucial moments as the two players were locked in an intense baseline-battle.

The Indian saved another breakpoint in the sixth game for a 4-2 cushion, then got another break in the next game and later, drew level when Rodionova hit a forehand long.

Sania curbed her errors in the second set as she committed just one double fault, as opposed to six in the opening set.

The capacity crowd also backed the home favourite, much to the annoyance of Rodionova, who lost her cool midway through to the match due to a distraction caused by noise.