India's chances of progressing to the semi-finals of the women's hockey event in the Commonwealth Games received a setback after the home team went down fighting 1-2 to defending champions Australia in their second Pool A match in New Delhi on Wednesday.

India had earlier drawn 1-1 with lowly Scotland while Australia had thrashed Trinidad and Tobago 11-0.

India will next face Trinidad and Tobago on Friday while Australia will be up against South Africa. 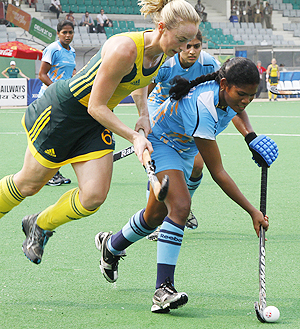 Unlike their previous outing against Scotland, India displayed a much-improved performance and started the match on an attacking note.

Dipika Murthy was impressive for India in front of goal as she thwarted numerous attacks from the Australian forwards.

India looked set to take an early lead as they repeatedly threaten to break past the Australian defence in the first 10 minutes; however their efforts were nullified as failed to add the finishing touches.

Chanchan Devi got the first opportunity to send the home team ahead in the third minute after captain Surinder Kaur and veteran Saba Anjum combined well on the right flank to set her up. But the Manipuri failed to connect Anjum's parallel cross.

Both India and Australia were awarded six penalty corners each in the opening session. But neither of them managed to convert the chances.

However, it was the Hockeyroos who broke the deadlock in the 13th minute through Liddelow, following some sloppy defending inside the circle by the Indians.

India too got their share of opportunities in the dying moments of the first half with two consecutive penalty corners but on both occasion their variation did not work.

The script of the second half, however, was different as Australia had more ball possession while the Indians were guilty of holding on to the ball too long and then losing it.

India's best chance of the second half came in the 52nd minute when Ritu Rani's powerful reverse flick from inside the circle was padded away by Aussie custodian Rachel Lynch.

Compared to India, Australia had a terrible day in office in terms of penalty corner conversion as after missing six in the opening half they wasted four more in the second period.

Australia broke Indian hearts in the 59th minute when veteran Nelson slammed home her side's second goal after receiving a Kate Hollywood pass from the right side.

Rampal, however, reduced the deficit for India just seconds from the final hooter after latching on to a Nicole Jessica Arrold's wrong pass inside the circle.