Defending champions India and South Korea were on Sunday declared joint winners of the Sultan Azlan Shah hockey tournament as the summit clash between the two teams was called off due to rain in Ipoh, Malaysia. 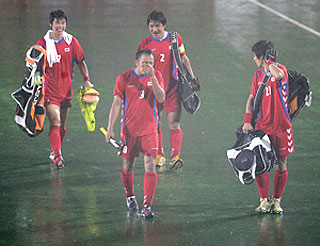 The final match was abandoned after six minutes of play as heavy showers lashed the turf.

India had lost only one match, against Malaysia, en route to the final.

This is the first time in the history of the tournament, which began in 1983, that there have been joint winners.

Indian defender Sardar Singh was adjuged Player of the Tournament.

The Indian team management, when called by the FIH Tournament Director Paul Richards, expressed the desire to be given the winners trophy since they had topped the seven team round-robin league with 13 points as well as having beaten the Koreans 3-2 at that stage.

However, it was decided to give the winners cup to both the teams, which gave India their fifth title and the Koreans grabbed their second.

They had lost the title clash of the 2008 event to Argentina via golden goal.

In another classification match, Pakistan finished fifth after pipping China 6-5 in the sudden death tie-breaker after being locked 1-1 till extra time.