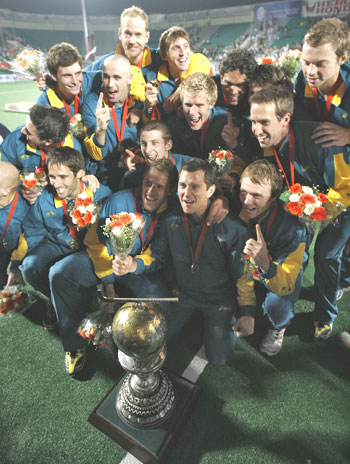 Australia shattered Germany's dream of registering the first hat-trick of world hockey titles in the history of the game, beating the double defending champions 2-1 in the summit clash of the FIH World Cup in New Delhi on Saturday.

With this win, the Aussies not only avenged their defeats in the last two editions of the tournament but also clinched their second world title.

For Australia, Edward Ockenden scored the first goal in the sixth minute while Luke Doerner converted a penalty-corner in the 59th minute to become the top-scorer of the tournament along with Dutchman Taeke Taekema with eight goals apiece.

Moritz Furste scored the lone goal for the Germans in the 47th minute.

The Aussies had earlier won the title way back in 1986 in London but lost out in the finals against Germany in the last two World Cup finals in Kuala Lumpur (2002) and Monchengladbach, Germany (2006).

Incidentally, with this victory Australia coach Ric Charlesworth achieved a rare feat in the history of the game.

He became only the second player after the Netherlands' Hants Jorritsma to win the World Cup both as coach and player.

With revenge in mind, the Australians came out with a purpose and from the onset applied pressure on the German goal. Australia caught the German defence off-guard on more than one occasion with their attacking mindset.

Meanwhile, the Netherlands scripted a remarkable come-from-behind victory to win the hockey World Cup bronze medal by defeating England 4-3 in a thrilling match.

The Dutch, who were trailing 1-3 at the breather made a remarkable comeback by pumping in three goals in the second session to win their second bronze medal in World Cup history.

Australia's persistent pressure saw them draw first blood as early as in the sixth minute of the match from a goalmouth scramble through Ockenden.

Germany got a golden opportunity to draw parity in the 20th minute but young Martin Haner's drag-flick from their first penalty-corner went wide of the Aussie goal.

The Kookaburras, on the other hand, displayed classic man-to-man marking in the opening period as the German forwards found it difficult to make inroads into their opponent's circle.

Australia kept up the pressure in the entire opening half which resulted in numerous miss passes from an otherwise cool and calm German side.

Had it not been for Germany goalkeeper Tim Jessulat the Aussies could have gone into the breather with a 2-0 lead.

A brilliant Jessulat denied Doerner, who was later adjudged Man of the Match, the chance to become the top scorer of the tournament, making a great reflex-save six minutes before the interval.

Australia kept up the same momentum after the change of ends and got their second set piece just three minutes into the second half but Germany captain Maximillian Muller denied Doerner a certain goal with a fantastic goalline save.

The Germans, however, got their act together slowly and steadily as the match progressed.

Not only the defending champions tightened up their loose ends in defence but also displayed a better co-ordination between the mid-field and forward-line in the second half.

Germany's hardwork finally yielded result in the 47th minute when Moritz Furste scored the equaliser with a well executed variation from their second penalty-corner of the match.

Ten minutes later Germany got a chance to take the lead when they earned their third penalty-corner after video umpire was brought into action, but Furste's flick this time was deflected off target by the Aussie defence.

To the disappointment of the cheering capacity crowd, it was not to be Germany's day as Doerner finally came to the party in the 59th minute, beautifully converting Australia's third penalty-corner with a powerful drag-flick past Jessulat.

Thereafter, the Kookaburras got some more opportunities to extend their lead but Jessulat stood in between them and a goal.

Just four minutes from the hooter, Jessulat made a terrific double save.

Germany then went all out in the dying stages of the match in search of the equaliser and got a penalty-corner but Aussie custodian Nathan Burgers was up to the task.