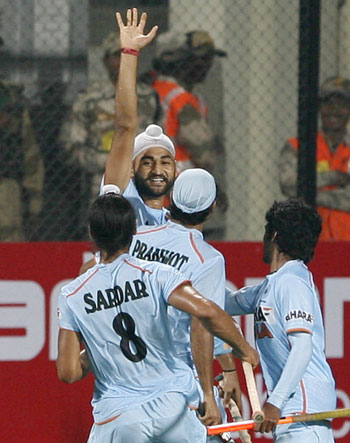 Bruised and battered by Australia, India will have to regroup their forces when they take on Spain in a crucial Pool B encounter of the hockey World Cup in New Delhi on Thursday.

After drubbing Pakistan 4-1 in their tournament opener, the Indians were given a reality check by Australia.

The hosts were surprised by the pace and verve of the Kookaburras, who completely outplayed them in all departments of the game in their 5-2 win on Tuesday.

Jose Brasa's men were taught a good hockey lesson by Australia and showed that only control over the mid-field was not enough to win a game.

If pace and fitness was all about Australia, world number three Spain is known for its flair and one-touch hockey and the Indian defence cannot afford to relax at any moment and repeat the mistakes they committed against Australia.

Against the Australians, the Indian defence wore a sorry look from the onset, conceding two goals within the first 10 minutes.

Sandeep Singh-led backline had no answers to the speed and angular passes of the Australians.

Such was the Aussie domination that even India coach Brasa admitted his players were not used to such fast nature of hockey. "We did not play bad, we played at our level much better than what we had in Salta.

But Australia played at a different level of fast-paced hockey. We were not used to that kind of fast hockey," Brasa said.

The Indian forwardline, which missed the banned Shivendra Singh, completely looked off-colour with Prabhjot Singh and Deepak Thakur doing very little to prove their presence in the game.

But with the two-match suspension ruling Shivendra out of the next match, the trio of Deepak, Prabhjot and captain Rajpal Singh will have to rise to the occasion and come out with more innovative ideas to beat the Spanish defence.

Sandeep had a bad day in office against Australia as he could not convert even a single penalty corner out of three that India earned, and the ace drag-flicker will have to pull up his socks against Spain as short corners are one of the strong points of the home team.

The Indians will also have to do away with their perennial habit of holding on to the ball for longer, a mistake which proved costly against Australia.

But notwithstanding all the flaws, Brasa will draw heart from the fact that the Indian mid-field sparkled yet again. Arjun Halappa and Sardar Singh were as cool as cucumber even under tremendous pressure.

But what they lacked is support from the forwardline and they will be eagerly looking forward to the strikers to deliver the goods against the Spaniards and see that their hardwork does not go waste.

Another and most important heartening factor for the eight-time Olympics champions ahead of the game is the presence of Brasa up their ranks as he knows more than enough about the Spaniards.

"Spain are a good team but of our level. I say this because they don't have two key players in their side  Santi Freixa and Eduard Tabau.

However, he said that in Pol Amat, Spain has got one of the best strikers of the world and his defenders will have against the Spanish captain.

"Pol Amat is a quality player. We will have to mark him closely," the Indian coach said.

Meanwhile in other matches of Pool B, Australia will look to consolidate their position in the points table when they take on a lowly South Africa, while Pakistan will look to play out of their skin to keep their winning momentum intact against an unbeaten England.