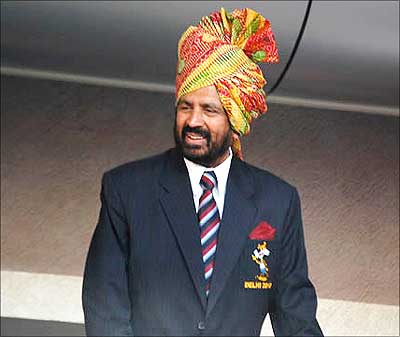 The Indian players and the support staff would be rewarded with Rs one lakh each for the superb 4-1 win over Pakistan in their hockey World Cup opening match, Indian Olympic Association President Suresh Kalmadi announced on Sunday.

A delighted Kalmadi patted the players and coach Jose Brasa for the thrilling win against Pakistan.

"The players played really well. It is a great start in the tournament. What (former coach) Ric Charlesworth could not not do Brasa has done. Full credit to Brasa and the players. They will be given Rs 1 lakh each," Kalmadi said after the match.

Experienced forward Prabhjot Singh, who scored a goal, said it was like celebrating 'Holi' a day in advance.

"We were delighted to win the match, we played as a team. It is like celebrating "Holi' in advance," Prabhjot said after the match.

Drag-flicker Sandeep Singh, who scored two goals, was happy to have contributed to the team's cause and said his side will have to now think of playing Australia.

"I am happy to have scored twice and helped the team win. It is great feeling but we have a tough match against Australia on Tuesday. Australia are a very strong side though they lost to England today. We have a job at hand," said Sandeep.

Pakistan striker Rehan Butt, who scored thrice in his side's 6-3 win against India when the two sides met last time in Argentina last December, said he was a bit surprised by the Indian domination.

"Yes, I would say I was a bit surprised. India played really well. If India maintain this form they will surely reach the semi-finals," he said.

"We are still in the tournament. We can bounce back still. We have to improve our performance and we can beat any side on our day. If we also reach semi-final it will be great for Asian hockey," said Rehan, who is known as 'rat' for his goal-poaching abilities especially against India.

Meanwhile, Sahara India Pariwar also announced a reward of Rs 2 lakh for every player, coach and assistant coach of the Indian hockey team.

"The way Indian hockey players have played is fantastic. Sahara India Pariwar chairman Subrata Roy had earlier promised that if the Indian team come out with good performance in the World Cup, he will reward the players," Abhijit Sarkar, chief corporate communication officer of Sahara, said.

"We are very proud that India has won their opening match against Pakistan in a grand and convincing manner. Sahara India Pariwar is announcing Rs 2 lakh for each player, coach and assistance coach as a token of appreciation and love," Sarkar added.