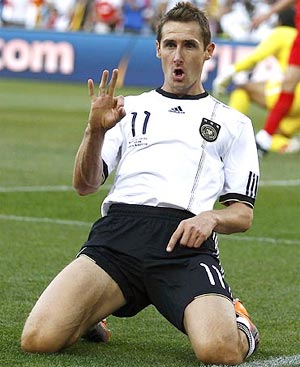 Germany striker Miroslav Klose could decide to quit the national side after the World Cup, the 32-year-old said on Monday.

Klose scored the opener in Sunday's 4-1 win over England in the World Cup last 16 to notch his 50th goal in 99 appearances.

"As long as my legs carry me I will play football," the Poland-born forward, who struggled to get into Bayern Munich's team last season, told a news conference.

"But I'm very spontaneous. I would not put it past me in two or three weeks to step aside and give space to new players," he added.

Klose has netted 12 goals in his three tournaments to equal Pele on the all-time World Cup scorers list, three behind top scorer Ronaldo on 15 .

On Germany's all-time scorers list he is in third place, with Gerd Mueller on top with 68 goals.
Source: