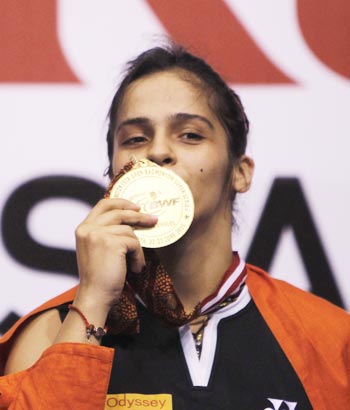 Saina Nehwal continued her irresistible form to claim her third straight title in as many weeks. The Indian ace won the Indonesia Open badminton Super Series in Jakarta on Sunday, beating Japan's Sayaka Sato 21-19, 13-21, 21-11 in the final.

It was at the Indonesia Open last year that Saina's rise to badminton's elite began, as she became the first Indian shuttler to win a Super series event.

In the last two weeks she won the Indian Open Grand Prix and Singapore Open Super Series which saw her rise three places in the world rankings to No 3.

By virtue of those consecutive titles, the 20-year-old, with 64791.2637 points, made a significant upward movement in the chart and is just behind the Chinese duo of Yihan Wang and Xin Wang.

Her previous best ranking was No 5, which she attained in March after becoming the first Indian woman to reach the semi-finals of the prestigious All England Super Series.