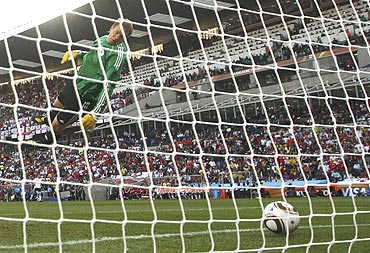 England were denied an equalising goal in their World Cup second round match with Germany on Sunday when a Frank Lampard shot from 20 metres out hit the crossbar and dropped well over the line.

With England just having pulled a goal back after Germany had taken a two-goal lead, Uruguayan refereee Jorge Larrionda decreed the ball had not crossed the line. A television replay showed it clearly had.

The incident drew comparison with the third England goal from Geoff Hurst in the 1966 final against West Germany, which Germans still say never crossed the line after his shot came down off the crossbar. England went on to win 4-2.

However on Sunday, England were on the losing end, with a dismal 4-1 margin.