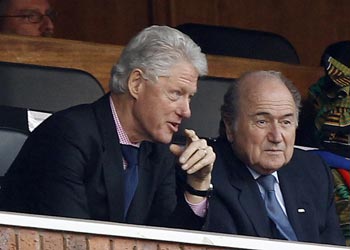 Former President Bill Clinton got to his feet to celebrate his team's last-gasp goal against Algeria at the World Cup on Wednesday and gave the players a speech about the American spirit afterwards.

"He was so proud of the team -- they didn't get frustrated by the fact they missed some chances today and didn't let the last game affect them (a 2-2 draw with Slovenia where they had a late goal disallowed).

"That's the American spirit, that's what President Clinton said in the locker room after the game," he added.

Landon Donovan's stoppage-time goal put the U.S. through to the knockout round as Group C winners, with Gulati saying Clinton was on his feet celebrating like the thousands of other American jubilant fans in the stadium. Donovan was thrilled by the dressing room visitor.

"He is very charismatic, you can tell how touched he was by the moment and it was really nice to have that," he told reporters.
Source:

© Copyright 2022 Reuters Limited. All rights reserved. Republication or redistribution of Reuters content, including by framing or similar means, is expressly prohibited without the prior written consent of Reuters. Reuters shall not be liable for any errors or delays in the content, or for any actions taken in reliance thereon.
Related News: Bill Clinton, Landon Donovan, Sunil Gulati, American, Soccer
COMMENT
Print this article