South Africa took advantage of a dispirited France team, who were reduced to 10 men for more than a hour, to win 2-1 in their last World Cup Group A match and restore some pride on Tuesday. 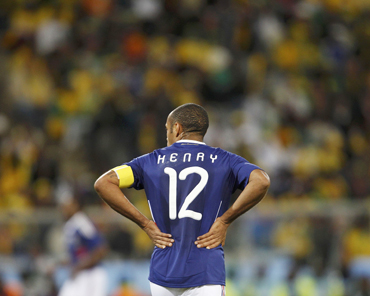 The hosts, seeking to put on a good display in front of 39,415 spectators at the Free State Stadium, recorded their first triumph over a major footballing power with first-half goals from Bongani Khumalo and Katlego Mphela.

However, they had the advantage of playing against 10 men for all but the first 25 minutes of the match after the controversial dismissal of Yoann Gourcuff.

The French playmaker, restored to the starting lineup and looking early on to conduct his team's attempted revival, was adjudged to have elbowed MacBeth Sibaya in a goalmouth heading duel but it looked unintentional.

The surprise red card came five minutes after a goalkeeping error allowed Khumalo to head home from a corner and with the man advantage saw the hosts stamp their authority on the game.

France keeper Hugo Lloris misjudged the height of the ball sailing over his head, allowing Khumalo to lean in over Abou Diaby to score.

The French defence was also caught out when Mphela scored the second goal in the 37th minute, bundling the ball over the line after a square pass from Tsepo Masilela.

Mphela could have netted again five minutes into the second half when he ran onto a clever through pass from Siphiwe Tshabalala but his shot grazed the side of the post.

France, who brought on forward Thierry Henry, showed effort in patches and pulled a goal back after 70 minutes when Franck Ribery suddenly sparked into life with a clever run that set up an easy tap-in for substitute Florent Malouda.

France's players had refused to train on Sunday in protest at the sending home of striker Nicolas Anelka for swearing at manager Raymond Domenech. Captain Patrice Evra was dropped as a result for Tuesday's match against South Africa.