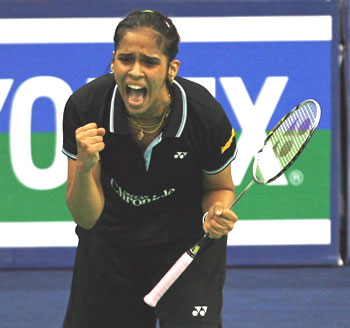 The world No 6, who was the lone Indian left in the fray after others crashed out by the semi-final stage, had bagged her maiden Super Series title last June at the Indonesian Open.

In a game that was close to start with, Saina was locked 18-18 with her opponent at one stage. She had seven smash winners to show against her Tai's three in the opening game.

In the second game, Saina displayed a better net game and outwitted her Tai in rallies to emerge triumphant.

The jubilant 20-year-old said she was slightly jittery at the start but gained in confidence as the match progressed.

"It feels great. I was nervous at the start of the match but I maintained my strategy of playing more rallies," she said.

"I was down 14-18 in the first game but I just told myself that 'play your best and give your 100 per cent'. I think that really worked well for me," she added.