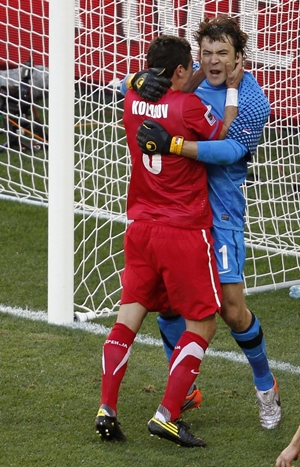 Serbia pulled off a stunning 1-0 victory over strongly favoured Germany, who played most of the match with 10 men after striker Miroslav Klose was sent off in the World Cup Group D match on Friday.

Germany fell apart in little more than a minute late in the first half. Klose received his marching orders in the 38th minute for a second yellow card and Serbia took instant advantage, scoring almost immediately through Milan Jovanovic.

Germany should have equalised in the 61st minute when Nemanja Vidic needlessly handled in the area to give them a penalty but Serbian goalkeeper Vladimir Stojkovic dived to his left to save Lukas Podolski's spot kick.

Germany still lead Group D with three points from two games, ahead of Ghana and Serbia, also on three, and Australia on none. Ghana and Australia meet in Rustenburg on Saturday for their second game.

© Copyright 2020 Reuters Limited. All rights reserved. Republication or redistribution of Reuters content, including by framing or similar means, is expressly prohibited without the prior written consent of Reuters. Reuters shall not be liable for any errors or delays in the content, or for any actions taken in reliance thereon.
Related News: Ghana, Germany, Serbia, Lukas Podolski, Nemanja Vidic
SHARE THIS STORYCOMMENT
Print this article