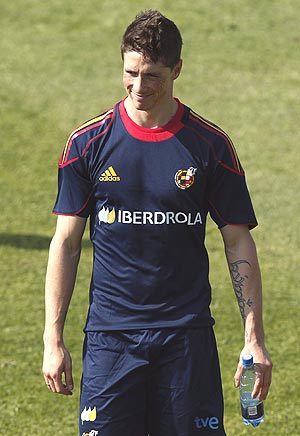 However, Iniesta and Torres, whose goal secured Spain's Euro 2008 triumph, still might not feature in the starting lineup for the tournament favourites' Group H match on Wednesday having struggled to overcome recent injuries.

Barcelona's Iniesta, who had a thigh strain, took full part in training both on Monday and Tuesday and had a "good feeling", team doctor Oscar Celada told the soccer federation's website (www.rfef.es).

"We still have some hours to talk with him and the doctors before making a decision," Del Bosque added at a news conference at the Moses Mabhida Stadium.

"We are thinking about tomorrow but also about the fact that would could progress further in the competition.

"If he doesn't make it, we have so many possibilities, Torres and Pedro (Rodriguez) ... we have 23 players who are in perfect condition to play," he added.

While many expect Spain not just to progress further in the tournament but to win it, Del Bosque said his players were sufficiently grounded not get carried away.

"We get a huge amount of optimism from outside, and we're already playing the final according to the fans," he added.

"I believe we have players who know what football is about. We are not in the fantasy world of the fans, we are in reality.

"Football is very tight, there is little difference between teams, and if you want to be successful, you must face these challenges with the necessary modesty."

That modesty demands respect for your opponents and Del Bosque thinks Ottmar Hitzfeld's Switzerland team, even without their injured captain and leading goalscorer Alex Frei, deserve nothing less.

"They are well-organised," the former Real Madrid boss said. "They have an excellent coach with an excellent record."

As well as avoiding the complacency that might derive from being favourites, Del Bosque said he thought his players would not be labouring under the weight of expectation either.

"I don't think we're under pressure but we feel a responsibility," he said.

"We believe we are privileged to compete here and I believe it is necessary for us to do the best possible work. "It is good to feel this sense of responsibility but it will not stop us from playing our game."

The 60-year-old coach said he himself was not nervous on the eve of his first World Cup match in charge.

© Copyright 2020 Reuters Limited. All rights reserved. Republication or redistribution of Reuters content, including by framing or similar means, is expressly prohibited without the prior written consent of Reuters. Reuters shall not be liable for any errors or delays in the content, or for any actions taken in reliance thereon.
Related News: Vicente Del Bosque, Fernando Torres, Andres Iniesta, Spain, Switzerland
SHARE THIS STORYCOMMENT
Print this article