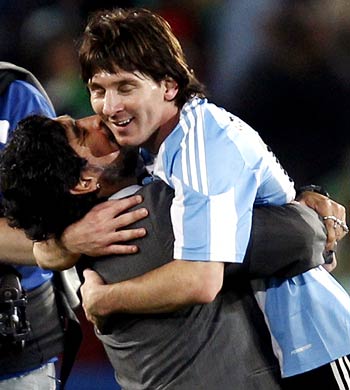 Lionel Messi mesmerised Nigeria in a magical display to confirm Argentina as one of the World Cup favourites but a goalkeeping bungle against the United States set England off to a disappointing start on Saturday.

World player of the year Messi, known as "the Flea" lived up to predictions he would be one of the Africa World Cup's leading players in a 1-0 victory.

Only some desperate defending by the Nigerians and some super saves by goalkeeper Vincent Enyeama avoided a much bigger defeat.

But England, who some pundits put behind only behind Spain and Brazil as pre-tournament favourites, fell short of three points despite Steven Gerrard's excellent goal in the fourth minute.

A 1-1 draw, though, still leaves both countries with a point and well placed to progress from Group C to the next round against weaker opposition on paper in Algeria and Slovenia.

The script for England was spoiled five minutes before half time when goalkeeper Robert Green fumbled what should have been an easy save and the ball rolled tantalisingly from his grasp into the net.

In the second half England stepped up their game and had a string of spurned chances but the US went closest to winning when Jozy Altadore's shot was deflected on to the post by Green.

Though he did not score, Messi peppered the Nigerian goal with shots, drawing a string of finger-tip saves from Enyeama, and tormenting the Africans with ceaseless jinking and dribbling.

Messi hailed a "phenomenal" game by Enyeama and the keeper said it was the performance of his life.

The diminutive 22-year-old Argentine confounded critics who said maverick manager Diego Maradona could not bring out the best in him.

Though Messi and Maradona have galvanised media attention in Argentina, it was defender Gabriel Heinze who headed a thunderbolt from a corner for the goal that beat one of Africa's perennial heavyweights.

Maradona, sporting a grey-flecked beard, threatened to steal attention from the pitch at times with an agitated display of arm-waving anxiety as he ranted and raved from the sidelines.

But even his antics could not distract from possibly the highest quality match so far of the tournament.

England's game near the northern town of Rustenburg was a sharp contrast.

A much improved United States side had always looked like awkward opponents but they often had England in real difficulty.

Wayne Rooney, tipped as one of the strikers of the tournament, did not shine, and England's attack repeatedly failed to exploit chances in front of goal.

Police had said the US-England match would be the most closely guarded of the tournament, although there was no indication of a specific terrorist threat.

Earlier, South Korea, who were unbeaten in qualifying, took that confidence straight into the Group B opener at Port Elizabeth, playing a slick and fast passing game to beat the Greeks 2-0 through goals from Lee Jung-soo and Park Ji-sung.

Greece were unable to capture the form of their shock Euro 2004 triumph or make their aerial superiority count against a mobile South Korean side who always looked in control.

Their lacklustre display is likely to deepen the gloom of Greeks wilting in a deep economic crisis and on Saturday's form the team will be clear underdogs in Group B.

South Africans were thrilled at Friday's successful start to a tournament pessimists had said Africa would be unable to handle.

The local Bafana Bafana (The Boys) side revelled in public acclaim after they started the continent's first World Cup with a creditable and exciting draw against Mexico.

That result, and the trouble-free start to the month-long, 64-game tournament, kept the vuvuzela horns blowing and South African flags flying across the nation on Saturday.

Showing South Africa's determination to overcome its fearsome reputation for crime, a court handed rapid punishment to two men who robbed World Cup journalists from Portugal and Spain, sentencing them each to 15 years in jail.