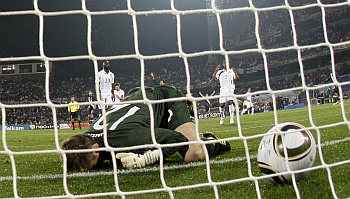 A howler by goalkeeper Robert Green gifted the United States an equaliser as England struggled to a disappointing 1-1 draw in their opening Group C game at the Royal Bafokeng Stadium on Saturday.

The 29-year-old goalkeeper failed to stop a routine shot by Clint Dempsey after 40 minutes and the ball slipped from his grasp and dribbled across the line after captain Steven Gerrard had put England ahead in the fourth minute.

It was a shattering moment for England and manager Fabio Capello who had gambled in handling Green only his ninth start for England and it restored the United States' confidence after a shaky opening.

England made a dream start and took the lead after only four minutes when, from a Glen Johnson throw on the right, Frank Lampard switched the ball infield to Emile Heskey whose angled pass found Gerrard running into space.

A low steered shot with the outside of his right foot from 10 metres gave Tim Howard no chance and Gerrard his 17th goal for England on his debut as their World Cup captain.

Instead of taking control, England drifted into a spell of unconvincing play and the Americans, sparked by the lively Dempsey and Landon Donovan, enjoyed most possession.

Jozy Altidore almost reached a cross from Donovan to equalise, but under pressure from Ledley King only skimmed a header wide.

Their recovery led to James Milner being cautioned for a foul on Steve Cherundolo and five minutes later he was withdrawn by Capello and replaced by Shaun Wright-Phillips.

A low shot by Donovan was saved uneasily by Green before the goalkeeper gifted the Americans' an equaliser after 40 minutes.

Capello reacted by replacing King, who has a chronic knee injury, with Jamie Carragher for the second half, which opened with Heskey wasting a good chance, by firing straight at Howard.

Carragher, after only 14 minutes on the field, and then Gerrard were booked for fouls as England battled to resist the Americans before a rising left-foot drive by Lampard was saved as the game opened out into a thrilling end-to-end contest.
Source:

© Copyright 2022 Reuters Limited. All rights reserved. Republication or redistribution of Reuters content, including by framing or similar means, is expressly prohibited without the prior written consent of Reuters. Reuters shall not be liable for any errors or delays in the content, or for any actions taken in reliance thereon.
Related News: Landon Donovan, Steven Gerrard, England, United States, Frank Lampard
COMMENT
Print this article