South Korea get off to flying start 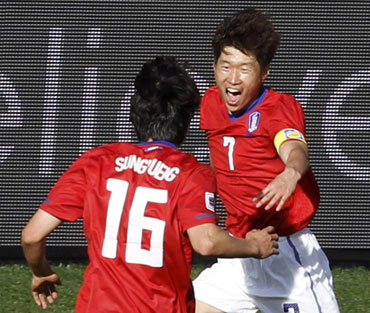 South Korea made an explosive start to their World Cup campaign with a fluent 2-0 win over Greece in their Group B opener on Saturday.

Goals from Lee Jung-soo and captain Park-Ji-sung early in each half gave South Korea only their second World Cup win on foreign soil and left Greece with a massive task to advance from a group that includes Nigeria and Argentina.

The Koreans defended solidly against the ariel threat of the taller Greek players, who bombarded their opponents with lofted passes that yielded few chances for a country that has lost every World Cup game they have played in.

The 2004 European champions struggled against a torrent of South Korean attacks, with European-based duo Cha Du-ri and Park Chu-young proving a handful for the Greek defence.

However, Greece started brightly and could have gone ahead in the third minute when Vassilis Torosidis steered Giorgos Karagounis's corner past the post.

South Korea, unbeaten in qualifying, always looked dangerous though and punished Greece with slick counter-attacking and neat passing play that left their opponents outnumbered at the back.

They snatched the lead in the seventh minute when Lee Young-pyo's corner drifted past four defenders into the path of Lee Jung-soo, who steered the ball into the net to spark frenzied celebrations from thousands of travelling Korean fans.

Greece battled to get back into the game but were caught off guard as the three-times Asian champions piled on the pressure and had two penalty appeals turned down.

Park Chu-young looked certain to double their lead near the half-hour mark when Park Ji-sung's incisive pass put him clean through on goal, only for his shot to clip goalkeeper Alexandros Tzorvas and spiral over the bar.

Park Ji-sung, uncharacteristically quiet in the first half, burst into life after the break and doubled South Korea's lead in the 52nd minute to deal a killer blow to Greece.

He chased a poorly weighted square ball from Avraam Papadopoulos, eluded two defenders and coolly slotted the ball into the corner from inside the area to clinch the points.