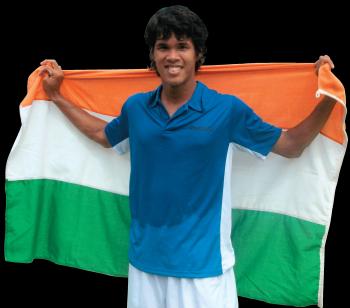 Somdev Devvarman, who became the first Indian to qualify for the French Open main draw in 13 years, rose to a career-best 104th in the ATP rankings issued on Monday.

Somdev jumped four places after qualifying for the main draw of the men's singles event at Roland Garros.

Yuki Bhambri, though, lost a place to sit at the 398th spot.

There was no change in the doubles rankings of Leander Paes (6) and Mahesh Bhupathi (7) but Rohan Bopanna (50) returned to top-50 with a jump of four places.

Meanwhile in the WTA rankings, Sania Mirza (91) maintained her singles ranking but lost two places (75) in the doubles chart.

Sania is making a comeback to competitive tennis at Aegon Classic in Birmingham on Mondy after a long injury break.

Sania Mirza's 'brother from another mother'

Sania rises to 90 in WTA rankings