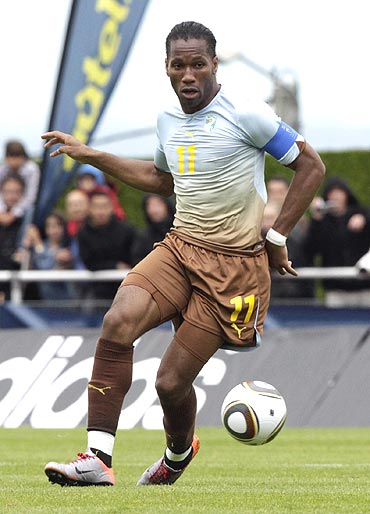 However, it is still not clear whether the African Footballer of the Year will be fit to play in the opening Group G match against Portugal in Port Elizabeth next week.

Drogba fractured the ulna, or inner bone, of his right forearm in a warm-up match against Japan in Switzerland on Friday, the federation said.

The striker had surgery in Berne on Saturday, an operation Swiss doctors described as successful.

A statement from the Ivorian federation said Drogba would rejoin his team-mates at their Swiss hotel on Monday.

He spent the weekend in hospital, surrounded by his wife and three children, the federation added.

"His recovery has been extremely encouraging. It is suggested that, at this stage, all the signs are good and there is great hope the captain of the Elephants will be in action with his team-mates as soon as possible," spokesman Roger Kouassi said.

The Ivorian squad departs for South Africa on Wednesday. They conclude their preparations in Switzerland with a friendly against Lausanne Sports in Nyon on Tuesday.

The speculation initially was that Drogba would not make the tournament in South Africa, adding to a growing list of high profile casualties including three of his Chelsea team mates.

Drogba averages more than a goal a game for the Ivory Coast and is seen as pivotal to their chances of getting past the first round. They also face Brazil and North Korea in a tough group but are more than capable of producing upsets.

© Copyright 2023 Reuters Limited. All rights reserved. Republication or redistribution of Reuters content, including by framing or similar means, is expressly prohibited without the prior written consent of Reuters. Reuters shall not be liable for any errors or delays in the content, or for any actions taken in reliance thereon.
Related News: Didier Drogba, Ivory Coast, South Africa, Ivorian Football Federation, Roger Kouassi
COMMENT
Print this article