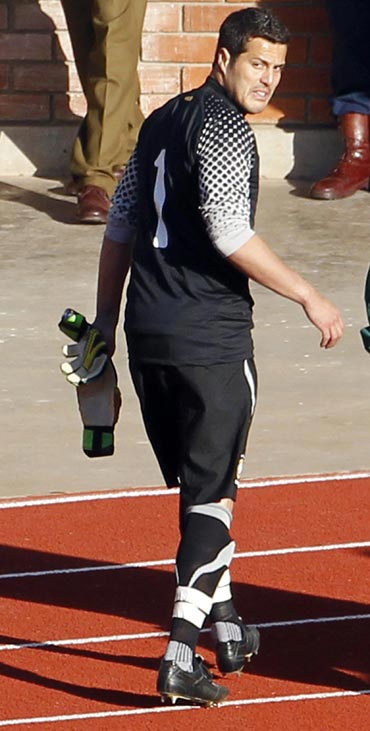 Brazil goalkeeper Julio Cesar will miss his first Brazil match for two years when he sits out Monday's friendly against Tanzania.

The Brazilian Football Confederation (CBF) said on Sunday that the 30-year-old would not travel to Tanzania after hurting his back in last week's match in Zimbabwe.

"Julio Cesar will not travel to Tanzania with the Brazilian team," CBF said in a statement. "He will continue working with the physiotherapist."

The Inter Milan goalkeeper, considered one of the world's best, went off in the first half of Brazil's 3-0 friendly win against Zimbabwe on Wednesday.

Brazil coach Dunga has already said that his injury is not serious and he should recover in a few days.

Julio Cesar has started each of Brazil's last 26 matches. The last game he missed was a 2-0 friendly defeat against Venezuela in June 2008.

© Copyright 2020 Reuters Limited. All rights reserved. Republication or redistribution of Reuters content, including by framing or similar means, is expressly prohibited without the prior written consent of Reuters. Reuters shall not be liable for any errors or delays in the content, or for any actions taken in reliance thereon.
Related News: Julio Cesar, CBF, Brazil, Tanzania, Inter Milan
SHARE THIS STORYCOMMENT
Print this article