Ledley King is viewed by many as England's 'invisible man' but in injured captain Rio Ferdinand's absence he is ready to realise his World Cup dreams. 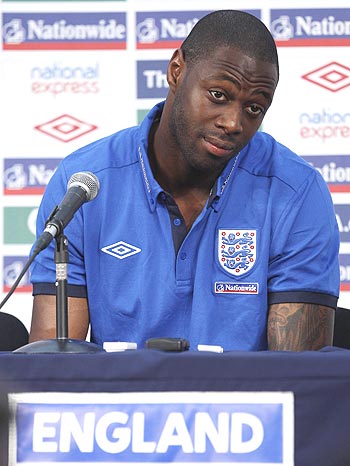 The 29-year-old Tottenham Hotspur defender, who suffers from a chronic knee injury that prevents him from training, is set to play alongside John Terry in central defence when England meet the United States in their opening Group C game on June 12.

If he does, it will be his first appearance for England at a World Cup finals tournament and complete a remarkable return to favour after years of injury-hit absences and disappointment.

His long international career started in 2002 but has since seen him start only 11 games and win 20 caps overall.

Ironically, he won his first major tournament cap when he deputised for the injured John Terry for England against France in Euro 2004.

"If I play, it would be my first World Cup appearance," he said on Sunday. "And for me that would be a dream come true, of course.

"It's something that you envision as a young player - to play for your country at the World Cup - and, yeah, it would be a dream.

"But right now I am just part of a 23-man squad and I am trying to work hard and prove that I can be part of a winning team."

King's England career has been sporadic, hit by injuries and punctuated by disappointments that included his enforced withdrawal from the 2006 squad with a broken foot bone.

Now he is battling swelling, soreness and pain that has to be kept under control.

His club manager Harry Redknapp said: "There's no cure. There's no cartilage, nothing to operate on. It's just bone on bone. So it's just a question of managing it ..."

After Fabio Capello took over as England manager in December 2007, he selected King for his first squad but the two-footed and composed central defender was forced to withdraw through injury.

When he was diagnosed with a chronic knee condition, he lost his place in the Tottenham team and, as a result, was not selected again in 2007 or the whole of 2008.

Instead of playing, however, King worked with his club's medical staff to find a way of strengthening his knees and preserving his career, a decision that has paid off.

Capello promised to keep King in his thoughts and when he proved his fitness in successive important games for Tottenham, he was picked for England's provisional 30-man squad, scored a goal in a warm-up game against Mexico and retained his place in the final 23.

"Just being here is great for me," he said. "And it is going well even if you don't see me on the training pitch. The medical team and the manager have allowed me to do what I normally do. I could not ask for more than that.

"I am fit to play," he confirmed. "And if I play on Monday (in a practice game against the local Platinum Stars team), it shouldn't be a problem playing again on Saturday."

King is expected to be in the starting line-up for the unofficial fixture at the Moruleng Stadium, an hour's drive north of Rustenburg in North West Province, and said he hoped to build a quick and solid partnership with Terry, a fellow-native of east London.

"I've known John a long time," he said. "He is a great communicator on the pitch and he is a very experienced player, as I am. I don't see a problem, if I am needed. I have prepared and I am ready.

"Regardless of me training just once a week, we don't have much time to work on it but communications are the key thing, they are vital in a partnership and if the back four communicates well that's good and you have a good chance."

© Copyright 2020 Reuters Limited. All rights reserved. Republication or redistribution of Reuters content, including by framing or similar means, is expressly prohibited without the prior written consent of Reuters. Reuters shall not be liable for any errors or delays in the content, or for any actions taken in reliance thereon.
Related News: John Terry, England, Fabio Capello, Tottenham Hotspur, Rio Ferdinand
SHARE THIS STORYCOMMENT
Print this article

Terry out of England game, Ferdinand made captain

'English football was a circus before Capello'