The soccer World Cup is uniting South Africa, much like the 1995 world rugby victory helped break down racial barriers, and it will leave a legacy for decades to come, President Jacob Zuma said on Sunday. 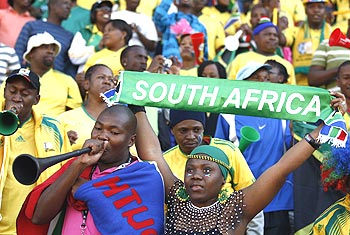 South Africa becomes the first African nation to host the world's most watched tournament from Friday.

"The enthusiasm, joy and excitement that has engulfed the entire nation in recent weeks has not been witnessed since President Nelson Mandela was released from prison (in 1990)," Zuma said at a press briefing.

"This explosion of national pride is a priceless benefit of the World Cup tournament."

Mandela led South Africa out of apartheid in 1994 but remains divided in many respects with most of the country's wealth still in the hands of the white minority and some communities still split along racial lines.

Officials hope the tournament will have the same effect as the image of Mandela - who spent 27 years in jail under apartheid - did when he famously handed over the rugby World Cup trophy to captain Francois Pienaar in 1995 wearing his Springbok jersey.

Rugby has traditionally been a white sport in South Africa, while soccer is followed fervently by the black majority.

Zuma said the enthusiasm for the June 11-July 11 tournament reminded him of that day.

"Building up to the tournament we have seen something that we have never seen before," he said, referring to thousands of people wearing shirts of the national side Bafana Bafana and flying flags from their cars and at homes.

A survey of 1,000 South Africans, conducted for soccer governing body FIFA and released on Saturday, showed that 92 percent are proud of the country hosting the tournament, and 86 percent believe it will be a success.

FIFA President Sepp Blatter said the World Cup would leave a legacy for the whole continent, which was still being sidelined by richer nations, through football development and education projects.

Both Blatter and Zuma said they hoped Mandela would attend the opening ceremony and first match on Friday. Mandela turns 92 next month and is increasingly frail.

His office will not confirm he will attend and some observers say he is not well enough to be at Johannesburg's Soccer City stadium for the match between South Africa and Mexico.

"Firstly, I think we all know former president Mandela has aged and for any aged person the manner in which you carry yourself has changed," Zuma said, when asked if the Nobel Peace Prize winner would be there.

"That is a decision for President Mandela to make ... if he is there it will be a bonus for this tournament. Indeed, we wish he will be there."

© Copyright 2022 Reuters Limited. All rights reserved. Republication or redistribution of Reuters content, including by framing or similar means, is expressly prohibited without the prior written consent of Reuters. Reuters shall not be liable for any errors or delays in the content, or for any actions taken in reliance thereon.
Related News: Nelson Mandela, Jacob Zuma, South Africa, FIFA, Sepp Blatter
COMMENT
Print this article

No basis to Triesman allegations: FIFA