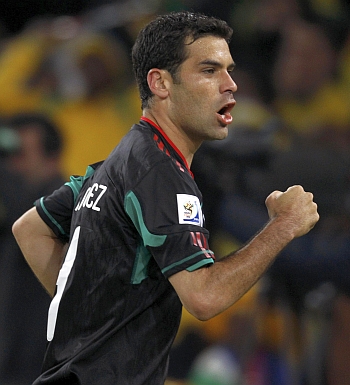 Mexico captain Rafael Marquez, who has been strongly linked in the media with a move to New York Red Bulls, has reached a deal with La Liga champions Barcelona that releases him from his contract.

"Barcelona and the player Rafa Marquez have agreed to rescind, by mutual consent, the contract that tied the two parties together until June 30, 2012," Barca said on their website on Saturday.

If the deal with the Red Bulls goes through, Marquez would join former Barca team-mate Thierry Henry, the French striker who this month moved to Major League Soccer (MLS) after he was also freed from his contract.

Marquez, 31, can operate as a centre back or defensive midfielder and would be the Red Bulls' third "designated player", whose wages are mostly exempt from the salary cap, along with Henry and Colombian Juan Pablo Angel.

He joined Barca from French side Monaco in 2003 and has won four Spanish league titles and two European Champions League crowns.

© Copyright 2022 Reuters Limited. All rights reserved. Republication or redistribution of Reuters content, including by framing or similar means, is expressly prohibited without the prior written consent of Reuters. Reuters shall not be liable for any errors or delays in the content, or for any actions taken in reliance thereon.
Related News: Barca, Rafael Marquez, New York Red Bulls, Barcelona, Thierry Henry
COMMENT
Print this article