News
Business
Movies
Sports
Cricket
Get Ahead
Money Tips
Shopping
Sign in  |  Create a Rediffmail account
Rediff.com  » Sports » It's a conspiracy against me: Kaushik 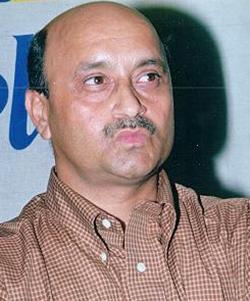 Stunned by allegations of sexual harassment against him, Indian women's hockey coach M K Kaushik on Wednesday said the scandal is a conspiracy hatched by players who failed to find a place in the national side.

"This is a big-time conspiracy against me, with many hands behind it. Those who failed to earn a place in the national team have come out with such a cheap act," Kaushik told PTI-Bhasha.

Kaushik has withdrawn from the Asian Champions Trophy in South Korea from July 27, insisting that it is his moral duty to step aside until proven innocent.

"I will prove my innocence. I can't believe that one can go to such an extent to level charges against me," he said.

Indian hockey on Tuesday plunged into a moral crisis after a member of the women's team sent a written complaint to the federation officials alleging sexual harassment by videographer Basavraj and a member of the coaching staff.

Hockey India sacked the videographer after photographs of him with a prostitute during the March-April China Tour surfaced in the media.

A four-member inquiry committee has been formed to look into the sex scandal. The committee comprises Rajiv Mehta (chairman), former players Zafar Iqbal and Ajit Pal Singh, and Sudharsan Pathak.

Kaushik said the allegations against him are baseless and he is confident of coming out of the crisis clean.

"With my name associated with this scandal how can I go to the stadium with the team? No question arises of me accompanying the team to South Korea. I am not in a position to lead the side there and work with mental peace," said Kaushik, who had mentored the side to the 2002 Manchester Commonwealth Games gold medal triumph.

Kaushik said the allegation has sullied his 20-year-old father-like image in the team, as he never thought players would go to such an extent to fulfill their vested interests.

"Go and ask the players why they have done so. I have always maintained that those players who will play to their fullest will remain in the team. Your performance will ultimately be counted and help in cementing your place in the side.

"In the last 20 years as women's hockey team coach, no one pointed a finger towards my integrity. My players have always treated me like a father-figure. It's difficult to understand what prompted them to come out with such false charges against me," Kaushik wondered.

He said he has not spoken to any of the players over phone since the scandal broke out on Tuesday and will continue to maintain silence until proven innocent.

"What is left for me to speak about? Truth will come out soon and I will treat this incident as an eye-opener for me. I'll urge the media to go and ask these players why they have done it?"

Kaushik's contract as will expire in November this year after the Asian Games in China.