Group D qualifiers Mumbai overcame a spirited Punjab 4-2 in an absorbing tie to storm into the semi-finals of the 63rd Rangaswamy Cup Senior National Hockey Championship at the floodlit Aishbagh Stadium in Bhopal on Wednesday. 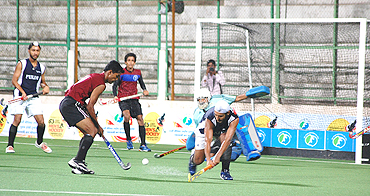 Mumbai dominated the match between the former champions but endured a brilliant second half challenge in which Punjab earned all their six penalty corners and a penalty stroke.

Mumbai began with a flourish, using both flanks to good effect, to put Punjab under immediate pressure soon after the start. As they held possession, Vikram Yadav's 18th minute through to Gyanendra Pandey posed the first real threat for Punjab. But there was nobody to connect Pandey's weak cross from the left.

Mumbai continued to dominate and earned their first penalty corner in the 19th minute that saw man of the match Gursev's drag flick crash into the horizontal and Jayesh Jadhav failing to tap in after the ball dropped in front of goal.

But Mumbai did not have to wait long to take the lead.

Three minutes later they were rewarded for their perseverance when a skillful Laxman Rao hit along the ground to the goalmouth from inside the circle on the right where a waiting Amit Gowda brilliantly deflected the ball in.

With no challenge from Punjab coming forth, Mumbai earned two more penalty corners in quick succession to end the first half without much ado.

On the first occasion in the 25th minute, the experienced Gursev's low push was palmed away to safety by an alert goalkeeper Bikramjit Singh, while in the 33rd minute, the defender pushed wide after the busy Rao saw his weak effort blocked by the custodian.

After trailing by a goal at half time, Punjab were an improved force in the second half. They added more meaning to their thrusts as they combined well to put the pressure back on a Mumbai side that turned complacent.

After Navjot Singh pushed wide with only the goalkeeper at his mercy, following a brilliant solo run down the left flank in the 45th minute, Punjab were rewarded when defender Karanjeet equalized with a low push into the net via a brilliant set piece off their first penalty corner that put  the pressure back on Mumbai.

High drama followed when Mumbai were awarded a 50th minute stroke after Rao was illegally foiled by the goalkeeper while trying to score. The stroke was hotly disputed by Punjab who threatened a walkout.

Finally, wise counsel prevailed and the Punjab players took the field after 10 minutes. Gursev scored with a firm push from the spot to the roof of the net for a 2-1 lead that set the stage for an exciting finish with 20 minutes remaining.

It was an eventful last quarter with Punjab battling hard to keep their hopes alive and Mumbai desperate to hang on to their advantage.

But Mumbai enhanced their lead with Rao firing home off a 53rd minute penalty corner after Gursev fumbled, and Jayesh Jadhav making it 4-1 in the 64th after brilliant work by the tireless Vikram Yadav on the left.

In between, a sprawling Mumbai goalkeeper Sudhir Dixit blocked Simranjeet Singh's firm grounder off a penalty corner and captain Jasjit Kullar hit the rebound wide with a tee shot.

By then the match slipped out of Punjab's grasp, as they reduced the margin with a 66th minute penalty stroke scored by Karanjeet.

Meanwhile, last year's runners-up Delhi beat Jharkhand in their concluding league tie to qualify for the quarter-finals from Group A, while Steel Authority of India Limited (SAIL) overcame a spirited Orissa 5-3 to qualify from Group H.