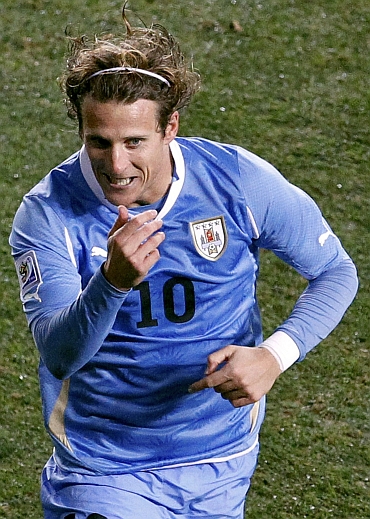 Uruguay's Diego Forlan won the best player of the tournament award on Sunday after lighting up the World Cup with some wonderful goals that helped his team become South America's only semi-finalist.

- Images from the World Cup final

The blond-locked striker won legions of admirers -- not least among South African women -- for his fantastic play on the pitch and courteous attitude off it where he always made time to sign autographs and chat with fans or journalists.

All three got five goals, making them joint top scorers along with Germany's Thomas Mueller.

Mueller took the "Golden Boot" award given to the top scorer, using assists and number of minutes played as a tie-breaker.

Forlan's award will cheer Uruguayans after their side lost agonisingly to Germany 3-2 in the third place playoff.

Spain emerged champions, beating the Netherlands 1-0 in extra-time in the final.