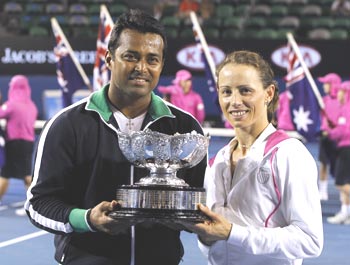 Leander Paes equalled the record for most Grand Slam title triumphs by an Indian as the veteran and his Zimbabwean partner Cara Black clinched the Australian Open mixed doubles Championship with a straight-set win in Melbourne on Sunday.

Top seeds and favourites, the 36-year-old Paes and the 30-year-old Black beat 10th seeds Ekaterina Makarova of Russia and Jaroslav Levinsky of Czechoslovakia 7-5, 6-3 in just about one and a half hour.

The last couple of times they reached a Grand Slam final, Paes and Black ended up on the losing side and eager to make amends for that, they were dominant from the word go today.

They broke their rivals as early as in the third game and save for a couple of breaks lost on Black's serve, the Indo-Zimbabwean pair seemed hardly troubled by Makarova and Levinsky, who committed far too many unforced errors.

Black, whose net game and serve were the weak links for the top seeds, raised her game when it mattered after getting some pep talk from Paes.

Having lost her serve twice, Black held it in the all-important 12th game before Paes smashed a winner to clinch the opener 7-5.

The emotionally charged Paes exulted and an equally enthusiastic crowd cheered him on in the stands.

With momentum going in their favour, Paes and Black broke their rivals in the very first game of the second set.

Makarova and Levinsky did have their moments but they were far too few in a match which left them amazed at Paes' athleticism.

They could only watch wide-eyed as the veteran Indian reached out to chase unlikely winners at the net and inspire his partner in moments of doubt.

This is Paes and Black's second title together, the first being the 2008 US Open.

Paes and Black had made back-to-back Grand Slam finals -- Wimbledon and the US Open -- last season but faltered at the finishing line in both the events.

Paes has been a former mixed doubles' champions at Melbourne Park and that triumph came in 2003 when he was partnering American legend Martina Navratilova.

Paes thanked the fans and Black for their support after the win.

"I want to thank fans in India and those who came here to support us. Tennis is our bread and butter but most important is that you make relations. Cara, I am blessed to have you as my partner. Thanks for supporting me," Paes said.

The admiration was mutual as Black too showered praise on Paes.

"Paes is a fabulous partner. I am thankful to him that he stuck with and took the hard shots rightfully. He is a great partner," she said.

It Paes to be Leander