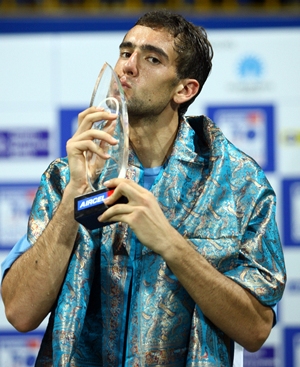 The second seed's victory made him only the second player -- after Spaniard Carlos Moya in 2004-05 -- to retain his title at Chennai while also ensuring him his fourth ATP Tour title, in his sixth final appearance.

It was also the Croat's first victory over the Swiss third seed, Cilic having managed to win only a set in four previous meeting -- the last one of which was at the 2008 French Open.

The 21-year-old Cilic is now 13-1 in three appearances in Chennai, having also been a semi-finalist in his maiden appearance in 2008.

"It was my toughest win and also my sweetest," admitted Cilic in the post-match conference.

"The conditions were really tough and he played very well at the start.

"But as the match progressed he couldn't handle my power game and that is why I managed to win," added the second seed.

The Swiss has now lost six of the seven finals that he has contested -- with his lone win in Umag (2006) coming courtesy a Novak Djokovic retirement.

"Every time I play a final, I play it against a bigger player," lamented Wawrinka, while trying to explain his poor record in the finals. "I definitely missed a chance to win the title today but he won the match because he deserved to.

"I needed to be aggressive in the tie-breaks, but it was he who kept on attacking at every available opportunity and that is why he won," added the Swiss.

It was nonetheless an improved performance by the 24-year-old Swiss, having lost in the first round here last year. 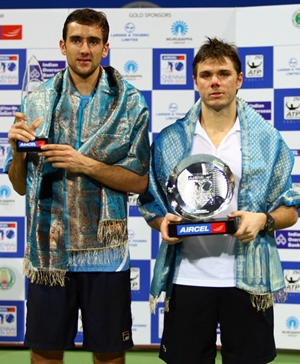 Coming to the match, it was anything but spectacular, with both players relying on each other to commit the errors more than makings them happen.

However, since both the contestants were evenly matched -- in terms of strengths and weaknesses -- it ensured the contest was a lengthy one, at 160 minutes to be precise.

Things went on serve for the first seven games before Wawrinka, after taking a medical time-out to treat a stiff neck, drew first blood in the eighth.

The Swiss secured three break points, courtesy three successive errors from Cilic's racket. The latter saved one of them only to commit yet another unforced error and hand Wawrinka the game and a 5-3 lead.

Cilic, however, came right back breaking the Swiss player's serve in the next game and holding his own comfortably to square things at 5-5.

Wawrinka had a set point - on Cilic's serve in the 12th game -- but failed to convert it.

And Cilic expressed his gratitude by dominating the ensuing tie-break (7-2).

The duo traded early breaks in the second set before going back to what they did in the first -- holding their respective service games with ease.

Cilic had a couple of more opportunities on Wawrinka's serve in the eighth game. He squandered both.

Not surprisingly, it required yet another tie-break to settle the second set.

And Cilic repeated what he had done best in the opening set -- dominate the tie-break. It was enough to give him his first win against the Swiss as also his second staright Chennai title.