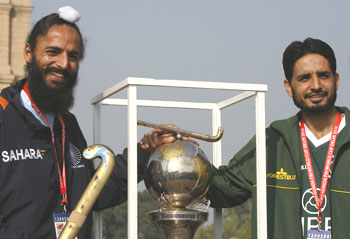 Emotions will run high when India, after a tumultuous build-up, will take on arch-rivals Pakistan in a potential humdinger of the hockey World Cup, which gets underway amid watertight security at the Dyan Chand National Stadium on Sunday.

India will have to leave behind the controversies that marred their run up to the high profile FIH tournament and put up a united front as stakes are high for the home team after the Olympic debacle.

Their eight Olympic gold notwithstanding, India have not won a major international title since their 1975 World Cup triumph in Kuala Lumpur.

Indian hockey has gone down considerably since then, evident from their result in the last couple of years.

After finishing a lowly 11th out of 12 teams in the last World Cup at Monchengladbach, Germany fours years ago, Indian hockey plunged to a new low in 2008 by missing out on an Olympic berth for the first time in 80 years.

After all these lows, this mega event brings with it an opportunity of a lifetime for Indian hockey to regain its lost glory in front of countrymen.

But achieving it is no mean task for the Rajpal Singh-led side and the first two matches  Pakistan and Australia  carry a lot of significance since result of these encounters would decide their fate in the tournament.

The match also gives Rajpal and his men an opportunity to avenge their 3-6 defeat at the hands of Pakistan in the semi-final of the Champions Challenge I tournament in Salta, Argentina.

The much-anticipated game carries a lot of importance for both the teams not only in the context of sporting ties between the two countries but also on the diplomatic front.

And expectedly emotions will run high in both the camps as for the first time after 26/11 Mumbai carnage, the two countries will be meeting each other on Indian soil.

India's chief coach Jose Brasa might be a Spaniard but he was smart enough to realise the high stakes associated with the game when he said his boys will have to control their emotions.

How much pressure Pakistan is facing could be ascertained by the statement of their skipper Zeeshan Ashraf, who conceded that the fans back home would even excuse their flop show in the World Cup if they will beat India.

We will have a slight edge over India because we have played well against them in the last three encounters. We defeated them comfortably. But tomorrow's match is all about sustaining pressure and making use of the chances," he said.

India have a handicap going into the high profile event as they are untested. They did not play any international teams in the run-up.

On the style of play, there is very little difference between the two teams but penalty corners and set pieces could eventually decide the outcome of the match.

In Sohail Abbas Pakistan has one of the best drag-flickers in the world, while India have three penalty corner specialists in experienced Sandeep Singh, Dhananjay Mahadik and young Diwakar Ram.

Pakistan's weakest link is deep defence and with experienced duo of Deepak Thakur and Prabhjot Singh upfront, the home team's best bet would be to strike early.

Pakistan enjoy a superior World Cup record than India as they have won the tournament four times  the last being in 1994.

On the other hand, after the 1975 triumph, India have not fared well in the showpiece event.

Meanwhile, in other matches of the inaugural day Spain take on South Africa in the lung opener followed by the the game between title favourites Australia and England.

N-deal with India a game changer: US