Canadians Tessa Virtue and Scott Moir had roaring home fans leaping to their feet after ending 34 years of European domination to win the Olympic ice dance gold medal on Monday. 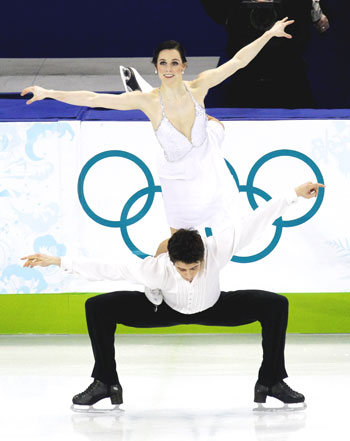 Virtue and Moir's stirring performance to Mahler's Symphony No 5 raised the domed roof at the Pacific Coliseum after they were awarded a combined total of 221.57 points.

They beat Americans Meryl Davis and Charlie White by 5.83 points.

Russian world champions Oksana Domnina and Maxim Shabalin had been tipped as the favourites but after being bumped down to third place in Sunday's original dance, they could not make up ground and had to settle for bronze.

As soon as they finished their mesmerising routine with Moir down on his knees tenderly holding Virtue's face in hands, the crowd erupted and went wild.

"Wow!" declared one banner while another proclaimed "Virtue(ly) Gold".

The judges certainly agreed. Once their score of 110.42 for the free programme flashed up, Moir thumped his chest with both hands and lifted Virtue up as she dug her nails into his back.

Davis and White, who share a coach and train with the champions, made it a double celebration for North America when they took silver for their dramatic and breathless Phantom of the Opera performance.

"I think in the last couple of years North America has really come into its own in the ice dance. The direction ice dance is taking has favoured North American teams ... it's really exciting to be part of it," an elated Davis said.

Since the introduction of ice dancing into the Olympics in 1976, Russian or Soviet couples had captured all but two of the gold medals. Britain's Jayne Torvill and Christopher Dean (1984) and French couple Marina Anissina and Gwendal Peizerat (2002) claimed the other two titles.

© Copyright 2020 Reuters Limited. All rights reserved. Republication or redistribution of Reuters content, including by framing or similar means, is expressly prohibited without the prior written consent of Reuters. Reuters shall not be liable for any errors or delays in the content, or for any actions taken in reliance thereon.
Related News: Scott Moir, Charlie White, Meryl Davis, North America, Canadians Tessa Virtue
SHARE THIS STORYCOMMENT
Print this article