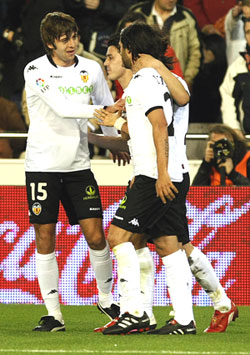 David Villa struck twice either side of halftime to go top of the La Liga list of leading scorers and fire 10-man Valencia to a 2-1 home win over Getafe on Monday.

The Spain striker swept the ball past Getafe goalkeeper Jordi Codina in the 39th minute to draw level on 16 goals with Barcelona forward Lionel Messi.

Villa's international colleague David Silva then sent him clear on the left seven minutes after the break and he lifted a delightful lob over the advancing Codina for his 17th of the campaign.

Valencia defender Alexis Ruano was shown a second yellow card in the 61st before Manu del Moral pulled one back for the visitors with 15 minutes of regular time remaining.

The victory lifts Unai Emery's side to 46 points from 23 matches, 10 behind second-placed Real Madrid, who trounced Villarreal 6-2 at the Bernabeu on Sunday.

© Copyright 2022 Reuters Limited. All rights reserved. Republication or redistribution of Reuters content, including by framing or similar means, is expressly prohibited without the prior written consent of Reuters. Reuters shall not be liable for any errors or delays in the content, or for any actions taken in reliance thereon.
Related News: Valencia, Getafe, Jordi Codina, Barcelona, Alexis Ruano
COMMENT
Print this article

Barcelona knocked out of King's Cup by Sevilla