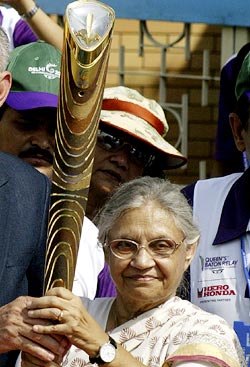 Scrambling to complete unfinished Commonwealth Games projects, Delhi chief minister Sheila Dikshit admitted that some of the agencies are "over ambitious" in trying to improve infrastructure and beautify the city ahead of the mega sporting event.

Blaming the incessant rains for delays in completion of projects, the chief minister, however, sounded confident of delivering a "good Games" and said she is not hoping for a postponement of the event.

"Some of the agencies were very ambitious, over ambitious. On top of that we have rains which has never happened like this in Delhi. That has slowed down work," Dikshit told CNN-IBN.

She was replying to a question about the city's overall preparation, the unfinished projects, especially the dug-up lanes in Connaught Place and huge mounds of rubble and construction waste still strewn across the national capital.

Dikshit, under mounting pressure to complete the unfinished projects, had on Friday refused to spell any deadline for their completion and only said all works will be over before commencement of the event on October 3.

"We are working round-the-clock. The moment rain stops, they (the workers) start working. I myself go to inspect the work...I would not hope for a postponement. I am confident we will give you good Games," Dikshit said.

Asked whether works will not be over if the rain does not stop, Dikshit did not give a direct reply but said "If it does not stop, then I can only pray and request the whole city and the country to pray."

"I would not take it so pessimistically. We will do it," she added.

With just 35 days left for the mega event, the city Government is yet to complete several key infrastructure projects including the key Barapullah Nallah elevated road project which will link the Games Village with the Jawaharlal Nehru Stadium.

Asked about the perennial problem of water-logging and traffic jams after a good spell of rains and tendency of the agencies concerned to shift responsibility to each other, she blamed it on multiplicity of authorities.

"That's true. There is a terrible problem of multiplicity of authorities and in coordinating them," she said, adding till it continues to rain, the problem of water-logging will remain in some areas of the city.

Queried about the preparation on the security front, Dikshit said over 40,000 well trained security personnel will be deployed during the event and all necessary steps are being taken to ensure fool proof security by the Union Home Ministry, Lt Governor Tejindra Khanna and the Delhi Police.

"I do not think any chances will be taken."

She also hinted about the possible inconveniences to the people due to security reasons.

"Please remember, security will cause some inconvenience to people. They will not be allowed to drop (from the cars) at the gates of the venues," Dikshit said.

The chief minister also admitted that keeping a land separately on certain roads in the city for transporting athletes and Games officials may cause traffic jams but appealed to the citizens to "adjust a little bit".

"I would appeal to the people to adjust a little bit. If one has to go somewhere then it can be postponed a little bit so that players can move freely. The players are our guests," she said.

The separate Games lanes will come into effect from September 20.

However, when asked about reports that large number of residents are petrified over the chaos and possible situation during the event and planning to leave the city, Dikshit assured that traffic police and other agencies are working hard to handle the situation properly.

"I think a few people believe that. The rest of the city is excited about the event," she said.

Dikshit said all the old traffic lights are being replaced by new lights and the project will be completed by September 12.

Asked about concerns being raised over the increasing cases of dengue, particularly ahead of the Games, Dikshit said Government is fully prepared to deal with the situation and that there is no reason to worry.

"Considering the city's total population of 1.7 crore, 600 cases of dengue is not a very large number. We have enough doctors and enough hospitals," she said, adding that if required, doctors from neighbouring towns like Noida would be roped in.

On the delay in commissioning of several new power plants, Dikshit said all arrangements are being made to ensure uninterrupted power supply in the city during the event.

"There will be no load-shedding during the event," the chief minister said.