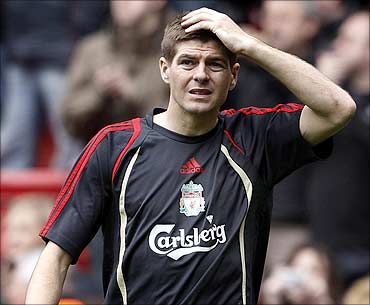 Liverpool will be without key duo Steven Gerrard and Fernando Torres for Thursday's Europa League playoff second leg away to Trabzonspor.

Liverpool manager Roy Hodgson, whose side take a 1-0 first leg lead to Turkey, will not risk playing Spain striker Torres in a third successive match given his recent injury problems, while captain Gerrard has a back problem.

"Steven Gerrard unfortunately has had a recurrence of the back problem which he gets from time to time. Hopefully it won't stop him playing on Sunday (against West Bromwich Albion)," Hodgson told the club website (www.liverpoolfc.tv).

Hodgson will also be without defender Daniel Agger, who suffered a concussion in the Premier League game against Arsenal earlier this month, and attacking midfielder Maxi Rodriguez, who is struggling with gastroenteritis.

© Copyright 2022 Reuters Limited. All rights reserved. Republication or redistribution of Reuters content, including by framing or similar means, is expressly prohibited without the prior written consent of Reuters. Reuters shall not be liable for any errors or delays in the content, or for any actions taken in reliance thereon.
COMMENT
Print this article