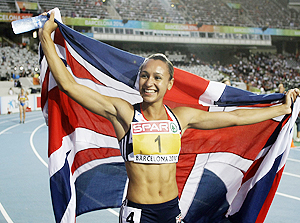 As England gears up to name its CWG athletics team on Wednesday, stars continue to opt out of the Games to nurse injuries and avoid exhaustion.

Ennis is the women's world and European heptathlon champion. She has not specified the reasons for her decision to pull out of the Delhi event, the build-up to which has been marred by corruption allegations and construction delays.

Ennis won the heptathlon gold at the Berlin world championships last year and added another in the European championships in Barcelona early this month.

She also won the pentathlon gold in the world indoor championships in Doha, in March this year. Also to her credit is a heptathlon bronze in the 2006 Commonwealth Games in Melbourne.

Meadows, who has opted out to rest the Achilles injury which hampered her this season, is a 2009 World Championships bronze medallist in the women's 800m.

But England selectors are still confident of naming a strong squad for the event.

World and European triple jump champion Phillips Idowu and Olympic 400 metres gold medallist Christine Ohuruogu are among those who are keen to travel to Delhi and defend their Commonwealth crowns.