India's OP Jaisha set a new national record with an effort of 10:03.05 in steeple chase, to win the gold medal on the final day of the National Inter-State Senior Athletics Championships in Patiala.

On a hot and humid evening, Jaisha outshined national record holder Sudha Singh, who came a distant second in 10:14.68.

Jaisha, an Asian Indoor champion in 1500m and bronze medalist in 5000m at the Doha Asiad, ran shoulder to shoulder with Sudha till the last lap made her move on the bell and increased her tempo when she start approaching the final straight to become an eventual victor cap.

Jaisha took steeplechase only two years ago when she clinched the national title at Madurai Inter-State championships.

Jauna Murmu of Orissa, who recently switched over from 400m flat to hurdles, was in the fine form and improved the meet mark with a time of 57.46 secs. However it was a shade away from her personal best and Asian All-Star Meet winning mark of 57.39 secs.

Asian champion Om Prakash Singh tossed the iron ball to a distance of 19.99m to prove his mettle in the men.

Geetha, a versatile 400m runner in the past and a regular member of national relay quartet in various global competitions, concentrated in 200m at recent times, having won silver medals in the Federation Cup at Ranchi and Open Nationals at Kochi this May.

After a surprise win over HM Jyothi of Karnataka in 100m on the opening day, Geetha today comfortably got the top spot in 200m clocking a modest 24.08 secs.

The Haryana lad Sunil Kumar Singh had similar victories in 5000m on the opening day before completing the double this morning with a victory over 10000m with a time of 29:55.22.

Pankaj Dimri of Uttarakhand for his performance in men's 800m (1:46.86) and Mandeep Kaur of Punjab for her mark of 52.13 in women's 400m have been adjudged the best athletes of the four-day national championships. 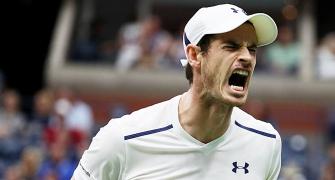