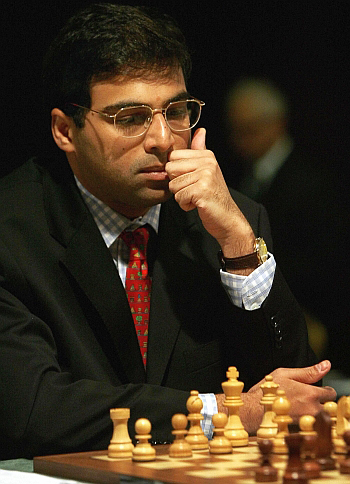 World chess champion Viswanathan Anand joined the Board of Directors of Olympic Gold Quest, which already has all time great Indian sportspersons like Geet Sethi, Prakash Padukone, P T Usha and Leander Paes, to give a boost to Olympic medal hopefuls.

"I am quite excited in taking this initiative forward and making sports and excellence part of our mindset. Our upcoming sportspersons can learn a lot from our experience and we in turn can provide them a platform for excellence," Anand said.

Eight-time World billiards champion and OGQ co-founder Geet Sethi said Anand's class and consistency in every format of the game make him a true role model for Indian sportspersons.

Badminton legend Padukone said Anand is an inspirational figure for all Indian sportspersons. His great vision, immense passion and patriotism are qualities that India desperately needs in all athletes who represent the country at Olympics, he said.

Anand, who has won three consecutive World Championship titles and four in all, including the knockout format in 2000, recently retained the title against Veselin Topalov in Sofia, Bulgaria.

Meanwhile, Sethi told reporters that OGQ was a foundation for promoting sports and games, committed to bridging the gap between the best athletes in India and those all over the world, and help Indian athletes win Olympic Gold medals.

"Presently OGQ depends on corporate sponsorships. We will take forward our OGQ movement in retail programme, implementing our plans to tap the common man," he said adding "our Government has been doing a lot in recent years but we are only bridging the gap where required."

"I will endeavour my best to win gold in coming events (World championship in Barbodos, Commonwealth Games, Asian Games) running up to 2012 London Olympics," she said.