He stands 6 feet nine inches tall and has an enviable record of playing in more consecutive games than any other player in National Basketball Association (NBA) history. But obviously, intimidation is the first thing that would creep into your system when you meet the man - NBA legend AC Green. 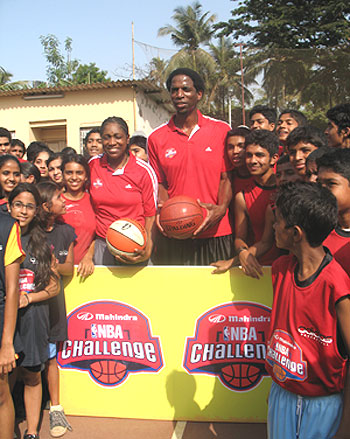 But fear is quickly replaced by respect, when the big man starts to express his views on Indian basketball, and what he plans to do on his Indian sojourn.

Green was accompanied with WNBA champion Teresa Edwards, who has represented US in five Olympics. Both of them are in India for the Mahindra NBA Challenge.

The program includes a six-week coaching clinic-cum league for youngsters from Mumbai, Bangalore and Ludhiana.

The final week will have a championship tournament between top teams from all three centres.

The clinic is open to both, boys and girls from the age of 14-17 and another category for players aged 18 and above.

About 961 participants have registered for the event and nearly 50 coaches will be trained by NBA's Troy Justice over the six weeks.

"I am very much appreciative and excited about being back here again. Thank you to the Basketball Federation of India for continuous support of basketball and promoting the game," Green said.

"I can't wait to get the clinic and the league itself started, to see the beginning and hopefully see the end of it and hopefully some games in between," said Green, who will be in Bangalore on Monday to train with the Indian basketball team.

While Green will trade some basketball secrets with the men's team, Edwards will be in Indore to train the Indian junior girl's team next week.

The St Dominic Savio basketball court was packed to capacity as the kids waited with bated breath for the clinic to commence. Justice, a renowned basketball coach in the US, started with many variations of warm-up drills for the participants. He then went onto offering defence and offence tips and positioning of the body and feet during play.

The participants were then divided into groups of four and made to put those drills and lessons into practice.

After 2 hours of fun and toil in the heat, the youngsters were finally let off.

"This initiative is a joint effort of the Basketball Federation of India and the NBA to promote basketball and make it the No 2 sport in India," said Akash Jain, NBA director, International Development  India.

Elaborating on why the NBA picked only the above mentioned cities for the clinic, Jain said, "We did a small study before starting this project and we realized from that that basketball has a huge following in Mumbai, Bangalore and Ludhiana and that is why we have targeted these three cities in this program."