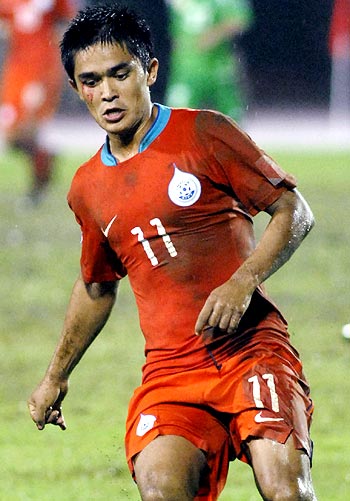 The forward, who joined Kansas on Tuesday as the first Indian player to ply his trade in MLS, came on the field in the second half of the match on Wednesday, and scored the team's fourth goal in a convincing win.

The other scorers for Kansas were Josh Wolff, Teal Bunbury, Korede Aiyegbusi and Igor Kostrov.

Chhetri has been a regular with the Indian national team since 2004, scoring 16 goals in 35 appearances. His most famous moment with the national team came in 2008, when he scored a hattrick in the final of the 2008 AFC Challenge Cup against Tajikistan.

The Wizards doesn't have any MLS engagement this weekend, will play an intra-club match on Saturday.

Their next MLS match is against Colorado Rapids at home on April 10, followed by an away game against Seattle the next Saturday.

The Wizards will be up against LA Galaxy in the match after that.