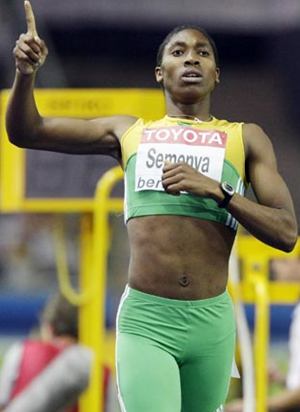 It said Semenya has three times more testosterone than a normal female and internal testes -- male sexual organs which produce testosterone, which in turn produce muscle bulk, body hair and a deep voice.

The paper added that Semenya is unaware of the tests identifying her as a hermaphrodite.

Tests, according to the paper, examined her physical make-up as well as her chromosomes and DNA.  'The process involved a physical medical evaluation and assessments by a gynaecologist, psychologist, internal medicine specialist and gender expert.'

The runner, who was raised as a girl by her family, has undergone a series of tests to try to end the speculation about her sex following the gold medal victory.

Powerfully-built but beautifully relaxed in motion, Semenya clocked 1 minute, 55.45 seconds for the year's fastest time and a personal best by more than a second at the World championships.

I'm going to make sure my name's up there: Warner