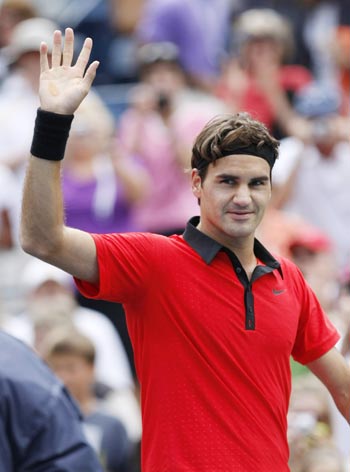 Five-times champion Roger Federer lost his first set of the 2009 US Open but rallied to defeat former winner Lleyton Hewitt 4-6, 6-3, 7-5, 6-4 on Saturday to reach the fourth round at Flushing Meadows.

In the 11th game of the third set, Federer assumed control when he broke Hewitt's serve after the Australian punched a backhand long.

The Swiss top seed served out the set and Hewitt, a former world number one and 2001 Open champion, was on his way to losing to Federer for a 14th successive time.

The 28-year-old Federer was not at his best during the two-hour, 33-minute match, committing an uncharacteristic 59 unforced errors

In the last 16, Federer will either face American James Blake or Spanish 14th seed Tommy Robredo, who play later on Saturday under the lights.

A lacklustre Novak Djokovic survived an unlikely battle with American world number 276 Jesse Witten before clinching a 6-7, 6-3, 7-6, 6-4 victory in the third round.

In a match containing 15 breaks of serve, the Serbian fourth seed was well below his best and Witten pushed him hard before finally wilting after three hours, 28 minutes.

Witten came from 5-2 down to snatch the first set on a tiebreak but Djokovic levelled and then played a decent tiebreak himself to win the third.

In just his second grand slam event, Witten stayed with Djokovic in the fourth set until 4-4 when the Serb broke and then held on to set up a fourth-round match with Czech 15th seed Radek Stepanek.

© Copyright 2022 Reuters Limited. All rights reserved. Republication or redistribution of Reuters content, including by framing or similar means, is expressly prohibited without the prior written consent of Reuters. Reuters shall not be liable for any errors or delays in the content, or for any actions taken in reliance thereon.
Related News: American James Blake, Jesse Witten, Radek Stepanek, Tommy Robredo, Roger Federer
COMMENT
Print this article

The Bachchans at the French Open