Sharapova inspired by 'the architecture of New York' 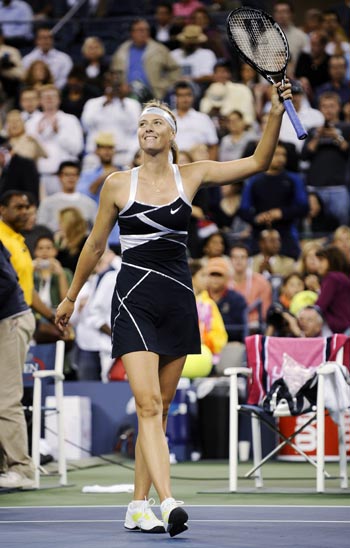 Maria Sharapova made a stylish return to the US Open when she walloped Bulgaria's Tsvetana Pironkova 6-3, 6-0 to reach the second round on Tuesday.

Wearing a black outfit criss-crossed with silver strapping, which she described as being "inspired by the architecture of New York," the 2006 champion was in sparkling form under floodlights and gave Pironkova a dressing down in 73 minutes.

The Russian, who is working her way back into top form after taking nine months out with a shoulder injury, won seven games in a row to book a second-round encounter with either American wildcard Christina McHale or Slovenia's Polona Hercog.

"It's a privilege to play here and I'm excited to be playing any match after being gone for a year," Sharapova, seeded 29th, told the crowd on Arthur Ashe Stadium.

"When you hear all the cheering, when you step on court, you realise what you really miss."

The Russian, against all odds, won the 2006 tournament beating heavyweights like Belgian Justine Henin and Frenchwoman Amelie Mauresmo along the way.

© Copyright 2021 Reuters Limited. All rights reserved. Republication or redistribution of Reuters content, including by framing or similar means, is expressly prohibited without the prior written consent of Reuters. Reuters shall not be liable for any errors or delays in the content, or for any actions taken in reliance thereon.
Related News: Belgian Justine Henin, Frenchwoman Amelie Mauresmo, Christina McHale, Maria Sharapova, Tsvetana Pironkova
COMMENT
Print this article

Kalam not qualified to talk about Pokhran: Sethna