Asian Tour No 1 Jeev Milkha Singh hopes to produce an eye-catching performance at this week's Omega European Masters to boost his chances of earning a captain's pick for the Presidents Cup.

The Indian star will spearhead Asia's challenge in the 2 million (US$2.8 million) showpiece jointly sanctioned with the European Tour and he is determined to show International Team captain Greg Norman that he is back to his best form after returning from injury recently. 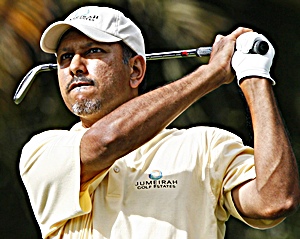 "I'm glad to be back playing and that's the most important thing. I feel my game is coming around and I'm happy to be on the golf course. Obviously, it (Presidents Cup) is on my mind but it's Norman's call at the end of the day," said Singh.

Bidding to become India's first player in the biennial team competition against the United States, which takes place next month in San Francisco, Singh finished 12th on the International Team rankings, two rungs outside the top-10 which guaranteed an automatic selection. Norman will name his picks next Tuesday.

His chances were badly hit when he tore muscles near his ribs which saw him miss several events, including the British Open in July but Singh showed he was well on the road to full recovery by playing in all four rounds at the US PGA Championship last month. He then finished tied 17th in a US PGA Tour event in the following week.

"I've never played in the Presidents Cup. I would like to play in it, I have always looked at the top players playing in the event," he said.

"I played really well, rock solid (at the Wyndham Championship). The last three rounds, I made two bogeys. That was good, it shows the game is coming round. I'm happy with it and I'm striking it well. The confidence is coming back after the injury. I'm fit and the game is feeling good."

"I think it's fantastic. The way golf is going, it's a global sport now and it's looking to be included in the Olympics as well," said the Indian, who is also an Asian Tour honorary member.

"Europe has been coming to Asia and we have had many co-sanctioned events there. Coming here this week and even going somewhere else (in Europe), I think it'll be great. It's the best thing for Asian golf. Asians always play in Asian conditions when the Europeans come out and we now have the chance to play in European conditions. It's a great mix of things."

Woods could lose world No. 1 spot to Mickelson