US Open champion Juan Martin Del Potro will stand in for Roger Federer at the invitational Kooyong Classic in January if the Swiss world number one decides against defending his title, organisers said on Tuesday. 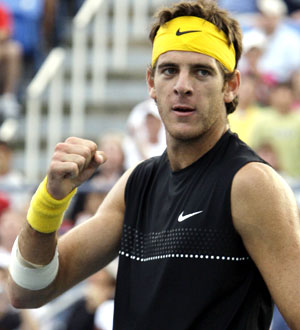 Federer thrashed compatriot Stanislas Wawrinka to win the title earlier this year, but is in doubt for the January 13-19 Australian Open warm-up event due to a shift in priorities having become the father of twin girls.

The 15-times grand slam champion has indicated he may scale back his tournament programme in 2010.

"If Roger decides against playing at Kooyong, or another player withdraws before January 13, Juan Martin will step into the field," tournament director Colin Stubs said in a statement.

"I am delighted that such strong back-up plans have been put in place," Stubs added of the Argentine world number five.

Apart from missing the 2008 tournament with glandular fever, Federer has been a fixture at the leafy Kooyong Lawn Tennis Club since 2004 and has used it as a springboard to three Australian Open titles.

Organisers said they would be prepared to wait until "the day before" for his confirmation at Kooyong, which guarantees all players in the eight-man field three matches on the same surface used at Melbourne Park for the Australian grand slam.

Organisers have already confirmed seven out of the eight, including Serbian world number four Novak Djokovic, and seventh-ranked Jo-Wilfried Tsonga, of France.