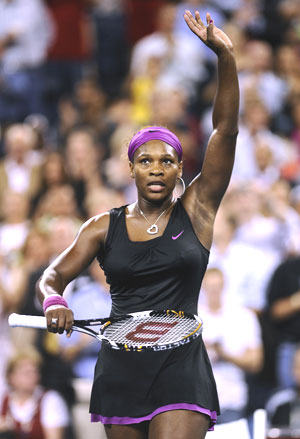 World number one Serena Williams has been fined $175,000 and put on probation for two years for her foul-mouthed tirade at the US Open, the International Tennis Federation (ITF) said on Monday.

"On 9 November 2009, the grand slam committee administrator determined Serena Williams had committed the grand slam major offence of aggravated behaviour for her misconduct at the 2009 US Open," an ITF statement said.

The outburst was prompted by an incident in her semi-final against eventual champion Kim Clijsters in September.

Trailing 4-6, 5-6, 15-30, Serena launched into a second serve but the baseline lineswoman called her for a foot-fault  meaning the American had served a double-fault to go match point down.

Astounded by the verdict, Serena launched into an expletive-laced rant at the official. She waved her racket in the lineswoman's direction and then shook a ball in her clenched fist as she threatened to "shove it down" her throat.

Having already received a warning earlier in the match for smashing a racket, Serena was handed an automatic point penalty for a second violation, which abruptly ended the match, giving Clijsters a 6-4, 7-5 victory.

Organisers fined her $10,500, the biggest given to a female player since records began in 1990, at the end of the tournament, for her unsportsmanlike behaviour.

© Copyright 2020 Reuters Limited. All rights reserved. Republication or redistribution of Reuters content, including by framing or similar means, is expressly prohibited without the prior written consent of Reuters. Reuters shall not be liable for any errors or delays in the content, or for any actions taken in reliance thereon.
Related News: Serena Williams, International Tennis Federation, Kim Clijsters
SHARE THIS STORYCOMMENT
Print this article