Surprise package Auxerre knocked champions Girondins Bordeaux off the top of Ligue 1 with a 2-0 win over Monaco on Saturday.

The victory put the Burgundy side a point ahead of Bordeaux, who slumped to their first home Ligue 1 defeat in over two years when Valenciennes beat them 1-0. 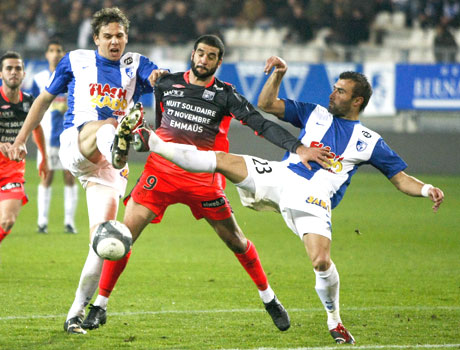 Auxerre, French champions in 1996, have not been in the lead since February 2003. They have 26 points from 13 games, one more than Bordeaux and Olympique Lyon, third on goal difference after a 1-1 draw at bottom club Grenoble.

"This is great for us and for our fans. I don't know how long we'll stay there, probably not for ever but it's nice."

Bordeaux had not lost before their fans since a 3-1 defeat by Olympique Lyon in October 2007.

Forward Mamadou Samassa scored the winner for Valenciennes with an angled shot on six minutes, sending the northerners up to fourth, three points off the pace.

Bordeaux, who were missing key players in playmaker Yoann Gourcuff and holding midfielder Alou Diarra, both sidelined with injuries, lost their second league match in succession after a 2-0 defeat at Lille.

Coach Laurent Blanc would have hoped for a better warm-up before the team from the wine capital entertain Juventus in the Champions League on Wednesday.

"It's a long time since we played good football," Bordeaux defender Marc Planus said. "We really tried tonight but couldn't make it. It's very frustrating."

Lyon were widely favoured to win at Grenoble, who had picked just one point from 12 games, and looked set to do so after Argentine winger Cesar Delgado put them ahead on 66 minutes.

Grenoble then had midfielder Laurent Courtois sent off in the 71st minute for angrily throwing the ball at an assistant referee. Two minutes later Serbian forward Danijel Ljuboja earned the home side a share of the points.

© Copyright 2020 Reuters Limited. All rights reserved. Republication or redistribution of Reuters content, including by framing or similar means, is expressly prohibited without the prior written consent of Reuters. Reuters shall not be liable for any errors or delays in the content, or for any actions taken in reliance thereon.
Related News: Grenoble, Girondins Bordeaux, Auxerre, Olympique Lyon, Ligue
SHARE THIS STORYCOMMENT
Print this article