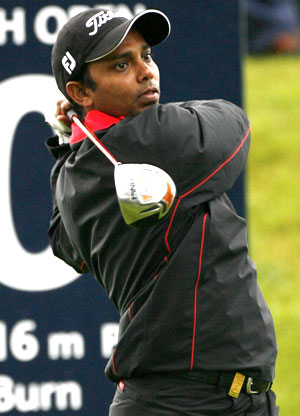 SSP Chowrasia's quest for his lost form seems to have ended and the affable Kolkata pro lies tied seventh after a brilliant five-under 65, while Jeev Milkha Singh got off to a rather mundane start in the $2.5 million Hong Kong Open golf tournament.

One shot behind at tied 16th was the Indian duo of Jyoti Randhawa and Gaganjeet Bhullar, followed by Rahil Gangjee (67), Shiv Kapur (68), Gaurav Ghei (69).

Jeev and Anirban Lahiri shared the 94th place at one-over 71, ahead of compatriots C Muniyappa (73) and Digvijay Singh (76) whose chances of making the cut look slim.

A 10th tee starter, Chowrasia could have been among the top three but for the final hole bogey, the only shot he dropped.

His back nine was a neat display where birdies on the 13th and 15th hole put him at four-under at the turn and everything went smoothly in his front nine also as he birdied the second and third holes to go six-under.

The lone blot came in the ninth hole, where he dropped his only stroke of the day but it still was a sparkling show by a golfer groping for his lost form.

European Tour regular Jyoti Randhawa was his composed self and he birdied three of the first four to get off to a strong start and he picked up two more strokes, while dropping one at the fifth, to round off a satisfying outing.

In contrast, Bhullar bogeyed the first hole but signed off on a birdie-birdie note and picked up three more shots in between to join Randhawa at the 16th place.

Rahil Gangjee was tied 29th at 67, one shot ahead of 40th place Shiv Kapur.

Playing his back nine first, Jeev parred his first nine holes but bogeys on the first and fifth holes pushed him to the back foot. Jeev birdied the sixth and seventh to restore parity but the eighth hole bogey left him with a one-over 71 card.

At the top, unheralded Udorn Duangdecha of Thailand sprung a surprise when he upstaged the marquee names to take the first round lead with an opening eight-under 62.

Robert-Jan Derksen of the Netherlands, who had taken the morning lead, heads into the second round in second place on 63 while Thailand's Thongchai Jaidee together with defending champion Lin Wen-tang, England's David Dixon and France's Gregory Bourdy are a further shot back in tied-third on 64.