Ronaldo has been sidelined for almost a month with an ankle injury and Simao said he hoped Real's world record signing would miss the match at the Calderon but be fit in time for Portugal's two-legged World Cup playoff against Bosnia later this month. 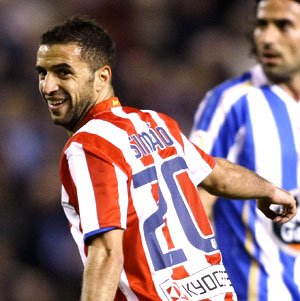 "Cristiano was the best player in the world last year but Real Madrid can't just depend on one man," he said on the club's website (www.clubatleticodemadrid.com).

"It's important for my country that he recovers from his injury but I hope it's after Saturday."

Second-placed Real's form has dipped in Ronaldo's absence and coach Manuel Pellegrini looks likely to be without him on Saturday after the club said he would seek a second opinion in the Netherlands after tests in Madrid had shown the injury had not completely healed and he was unable to return to training.

"It's clear that we need Cristiano because he is a very important player for us," Real defender Marcelo said on the club's website (www.realmadrid.com).

"I hope he recovers as quickly as possible but we have other players that can help the team a lot."

Atletico, who replaced coach Abel Resino with Quique Sanchez Flores on October 23, are mired in the relegation places with just one win in nine matches.

Simao, however, said Tuesday's 2-2 Champions League draw at home to Chelsea had given the squad heart.

"Against Chelsea we did everything, we fought and the fans were on our side," he said.

"Together we are stronger and even though we are in a difficult period we believe in ourselves and we know we have what it takes to win on Saturday."

Real will also be without Spain international central defender Raul Albiol after their appeal against his red card in last week's 2-0 win over Getafe was rejected.

Marcelo admitted that Real's focus has not always been at 100 percent but said problems with concentration had been ironed out.

"In some matches we have been asleep at the start," he said. "But we have talked a lot and we have realised that without the spirit we have shown in the last few matches you can't win."

On Saturday, leaders Barcelona face fifth-placed Real Mallorca, who have surprised with impressive results this term.

Barca's lead over Real was trimmed to one point last week when they drew 1-1 at Osasuna and need to pick themselves up after a disappointing 0-0 Champions League draw at Rubin Kazan on Wednesday and the long trip back from Russia.

"We are playing our next game at home in front of our fans," Gerard Pique said after the Rubin match. "There is no reason for people to be concerned."