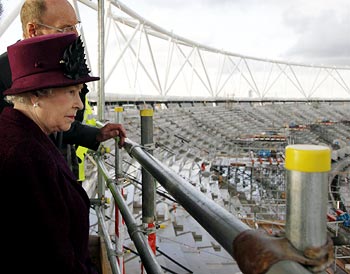 London 2012 chief Sebastian Coe described it as a symbolic moment when Queen Elizabeth toured the Olympic Park on Tuesday and planted the first of 4,000 trees that will landscape the site.

The Queen, who last visited in 2005, also viewed progress on the Olympic Stadium which is now a feature of the east London skyline as work continues on the venues and infrastructure for the 9.3 billion pound project.

Watched by construction workers, she stood on the spot that will be the finish line for the athletics track events in 2012 before planting a willow tree outside.

"(It is) a symbolic gesture that represents the most extraordinary effort by everyone to ensure the Games bring lasting change for millions of people across London and the country," organising committee chairman Coe said in a statement.

© Copyright 2020 Reuters Limited. All rights reserved. Republication or redistribution of Reuters content, including by framing or similar means, is expressly prohibited without the prior written consent of Reuters. Reuters shall not be liable for any errors or delays in the content, or for any actions taken in reliance thereon.
Related News: Sebastian Coe, London
SHARE THIS STORYCOMMENT
Print this article