A cuddle from dad ruffles Daley 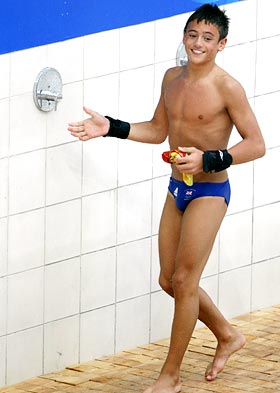 While Daley was calm and collected in the news conference afterwards, his father was so excited he posed as a member of the press and asked his son the all important question: "Tom, can I give you a cuddle?"

Daley reluctantly left his seat in front of the cameras and went to hug his father at the back of the room, before returning to the microphones and muttering: "How embarrassing!."

Seventh at last year's Beijing Games, Daley said he never expected to take the gold on a sweltering day at Rome's Foro Italico.

"Today was never the day I thought I would be world champion, to come away with the gold medal was just unthinkable this morning," he said.

"The next thing is hopefully to do the same thing at the London 2012 Olympics."

Officials said it was uncertain whether Daley is the youngest ever male diving champion. Age cheats could have slipped through the net in previous championships.

© Copyright 2021 Reuters Limited. All rights reserved. Republication or redistribution of Reuters content, including by framing or similar means, is expressly prohibited without the prior written consent of Reuters. Reuters shall not be liable for any errors or delays in the content, or for any actions taken in reliance thereon.
Related News: While Daley, Foro Italico, Qiu Bo, Reuters, Rome
SHARE THIS STORYCOMMENT
Print this article