Spain's Fernando Verdasco won the first ATP hard-court title of his career with a 6-4, 7-6 victory over American Sam Querrey in the New Haven Open on Saturday, just hours after he had won his semi-final. 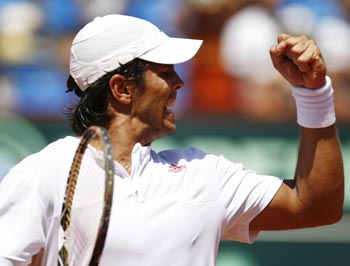 The 25-year-old second seed had earlier dispatched Igor Andreev of Russia 7-6, 7-6 in his semi-final to advance to the final against sixth-seeded Querrey.

The American had beaten Jose Acasuso of Argentina 6-3, 6-4.

Both had won their semi-finals indoors before returning to the court about four hours later.

Verdasco needed only 32 minutes to dispatch Querrey in the first set, and while he held a 4-2 lead in the second, the tall American fought back to break the Spaniard in the eighth game and force a tie-break.

"The second set was a little bit strange because I was 4-2 up, playing good," Verdasco told reporters.

"It was different (to last year)," Wozniacki told reporters.

"I mean, the last year was my second final and my second tournament win. It was something new. I never tried before. This year it was already my seventh final."

© Copyright 2022 Reuters Limited. All rights reserved. Republication or redistribution of Reuters content, including by framing or similar means, is expressly prohibited without the prior written consent of Reuters. Reuters shall not be liable for any errors or delays in the content, or for any actions taken in reliance thereon.
Related News: American Sam Querrey, Russian Elena Vesnina, Fernando Verdasco, Caroline Wozniacki, Jose Acasuso
COMMENT
Print this article